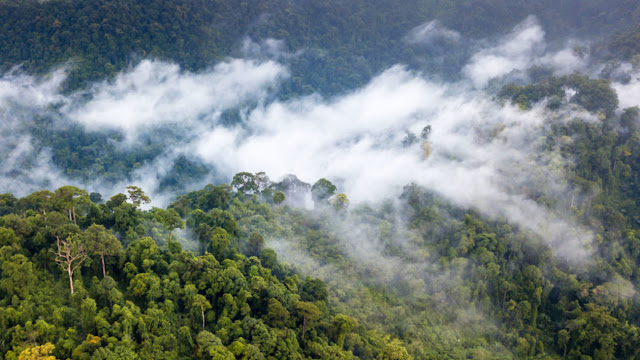 I have mentioned a recent novel, The Overstory, in several postings to this blog, and on April 16, 2020, an article in The New York Times provided some heartrending evidence of how much we need to pay attention to what Richard Powers is telling us in his new book.

The Times' article, which may or may not be available to those without a passport that gets them by The Times' paywall, was titled, "‘There’s No More Water’: Climate Change on a Drying Island."

Here is a brief excerpt from that article in The Times:

COMOROS — Hundreds of brightly clad women flock to the banks of the river each week to scrub their way through bundles of laundry. Some of them travel hours from tiny villages to access a critical but increasingly endangered resource here on the island of Anjouan: water.

The island, part of the nation of the Comoros off the East African coast, receives more annual rainfall than most of Europe. But a combination of deforestation and climate change has caused at least half of its permanent rivers to stop flowing in the dry season.

Since the 1950s, the island has been clearing forests to make way for farmland and in the process disrupted a delicate ecosystem. With so many trees and plants cut down, the water they would normally collect and feed back into the ground and rivers is disappearing. Families in parts of the island now struggle to meet their domestic needs, and farmers are finding it increasingly difficult to irrigate their fields.

“We’ve lost 40 permanent rivers in the last 50 years,” said Mohamed Misbahou, the technical director of Dahari, a nonprofit focused on reforesting land in some of the hardest hit areas on the island. “In some parts of the country, there’s now a big problem getting water.”

Another treatment of this topic, entitled, "Rivers in the Sky: How Deforestation Is Affecting Global Water Cycles," was published in July 2018, by the Yale School of Forestry & Environmental Studies.

Every day, as I write my next blog posting, I am making the argument that "We Live In A Political World." I almost always say that we live in that "Political World," a world created by our own human action, "most immediately." In other words, the way I understand our human situation, using my "Two Worlds Hypothesis," we are inhabitants of two different worlds, simultaneously.

Most immediately, almost every aspect of our existence is determined by our own human action, and we are free to fashion that human, "political" world as we choose. It never hurts to remind ourselves of this truth. The power that flows from our human engagement and action with others, what I call "politics," is often overlooked. We are great observers, but we fail to note our own individual and collective ability - our freedom - to do something new and different, and to transform the world in which we most immediately live.

"Ultimately," however, we do not live in that "Political World" that is our most immediate home. Ultimately, we live in the World of Nature, the World That God Made, the world that is alive, and into which we have so mysteriously appeared. We and all our human works are utterly and ultimately dependent on that World of Nature, and we forget that at our peril.

Trees are the guardians of the World of Nature upon which everything in our own human, political world depends.

There is so little time left for us to understand this truth!

When we do understand it - and perhaps in time - we will discover our ability fundamentally to transform our own world, the human world that is the world in which we most immediately live, and to conform that human world to the requirements of the World of Nature. That power to change our own behavior, and to transform our human world, is often overlooked. We look around; we see what we see, and we believe, somehow, that the way things are is a kind of inevitability; that what exists now is our destiny and fate. But of course that is not true. The world in which we most immediately live is a world that we create by marshaling our individual powers through the collective decisions that I call "politics." There is no limit to what we can do in our human-created world.

The World of Nature has been sending us various messages, in hurricanes and droughts, in floods, in water scarcity, in species extinction, and in disease pandemics.

We live, ultimately, in the World of Nature, and we must learn and follow all its laws.