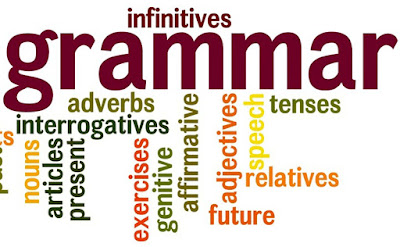 Anyone who writes a lot (I am counting myself in that number) must, inevitably, face challenges posed by the so-called "rules" of grammar.

There is a website (Easy Grammar Tutorials) that provides a daily grammar refresher for those who have enrolled in the website's grammar course. The publisher calls those daily bulletins "Grammar Grams." Click right here for the link.

Today, stimulated by a front-page article in The New York Times from a month or so ago, which article violated, in its very first sentence, a grammatical injunction related to "split infinitives," I decided to sound off here on the "rule" against split infinitives, and to provide you with a little "Grammar Gram" of my own.

Many don't even know what that "splitting infinitives" thing is all about, but I note that the graphic above, pulled into this blog posting for visual interest, puts "infinitives" at the very top of the grammar-related word list, perhaps indicating that how to use infinitives is somewhat important. At any rate, it is good to think about the issue, in my opinion.

All verbs have an "infinitive" form, before they are conjugated. In English, the infinitive form of a verb is written as "TO ... verb." The infinitive is BOTH WORDS. There may be two words, but there is only ONE infinitive.

The following examples illustrate properly stated infinitives, as expressed in English: "To eat," "To run," "To limit." When an infinitive is used in a sentence, both elements are supposed to be kept together. If they aren't, if something gets in between the "to" and the verb, that is called "splitting the infinitive," and it has long been held that it is a grammatical error to do that.

In that New York Times article I mentioned, which focused on the Trump Administration's efforts to gut rulemaking by the Environmental Protection Agency, the first line was written as follows:

WASHINGTON — The Trump administration is preparing to significantly limit the scientific and medical research that the government can use to determine public health regulations, overriding protests from scientists and physicians who say the new rule would undermine the scientific underpinnings of government policymaking (emphasis added).

If you consider that it is wrong to split infinitives, then the grammatically correct way to have written that first sentence would have been to say, "The Trump administration is preparing significantly to limit..."

Or, it would be proper to say, "The Trump administration is preparing to limit, significantly..."

The point is to keep both parts of the infinitive together, because although they are expressed by two words, the inifinitive is ONE thing. There is no comparable "splitting the infinitive" problem in Spanish or French, because the infinitive form of verbs in those languages is ONE word, not TWO words. In Spanish, for example,  "To eat" is "Comer." "To run" is "Correr." "To limit" is "Limitar."

When The New York Times (and even The New Yorker, I am sad to say) abandons the long-time grammatical "rule" that it is wrong to "split infinitives," old guys like me can become agitated.

Color me agitated! I know; I know! Rules are "made to be broken." It's no "big thing." The reader can still understand what you're saying, whether you split your infinitives or not. But.... dividing the one thing (the infinitive) into its two parts, and then pushing them apart by putting other words in the middle, is to muddle our understanding. That's what I think. In The New York Times' example, cited above, a reader can unconsciously start thinking that "to significantly," or "significantaly to" is some sort of real action when the action involved is "to limit."

At any rate, in my opinion, if you write a lot, you should honor the craft and not divide a unitary infinitive by splitting it into two parts!

End of my Grammar Gram for today!