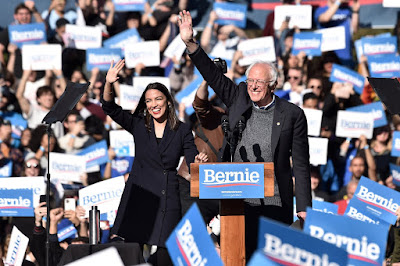 Michelle Goldberg writes columns for The New York Times. They are widely republished in other newspapers. I was interested in the column that appeared in the January 29, 2020, edition of the San Jose Mercury News, which addressed the "electability" of presidential candidate Bernie Sanders. The column was titled, "Here's what is actually driving the Bernie Sanders juggernaut."

The content of Goldberg's column didn't exactly jibe with the implicit promise contained in the title. The column didn't directly state what Goldberg thinks is "driving the Bernie Sanders juggernaut." She didn't say, in other words, "here is what is driving the Bernie Sanders juggernaut..." and then provide her analysis, to explain a phenomenon about which she is, obviously, very ambivalent.

Neither Goldberg, I'd say, and certainly not The New York Times, is enthusiastic about the "Socialist" who was leading in the polls on the day that Goldberg's column appeared, and who did so well yesterday, in Nevada. To learn her views, I recommend you read the entire column. However, the excerpt below provides what I think is the essence of Goldberg's analysis:

Eadon, [a 36-year-old former chairman of the Iowa Democratic Party who endorsed Sanders this month, and] who was previously with Julián Castro’s campaign, didn’t take Sanders seriously in 2016. Two things changed since then. A painful nerve disease forced Eadon to become intimate with the absurdist horror of America’s health care system. And he said he saw Sanders expanding the electorate. “His ability to keep bringing in new people, and people that have not been involved before, is just such a strength electorally,” said Eadon.

This is the paradox helping to fuel Sanders’ rise: The more he attracts people who are heedless of traditional electability concerns, the more electable he looks (emphasis added).

Correct me if I am wrong, but what I think Goldberg is saying is that the Sanders' "juggernaut," which is looking like it might make him "electable," is based on the fact that Sanders is actually telling voters that he will address the issues they care about most, and they are then responding favorably, by supporting Sanders.

If candidates who do that aren't "electable," then we don't have a democracy. Right?

Who decides who is "electable?" In our system, it is supposed to be the voters (not major newspapers and their columnists, or even party bureaucrats)!

This is a feature not found in many other presidential candidates (in my view)!

The "juggernaut" thing doesn't sound very pretty (and as Goldberg compares Sanders to Trump, and "the Trump juggernaut," you don't get a warm and friendly feeling about her use of the word). Still, analyzed the way I have just analyzed it, may be that what Goldbderg calls a "juggernaut" is not so bad.