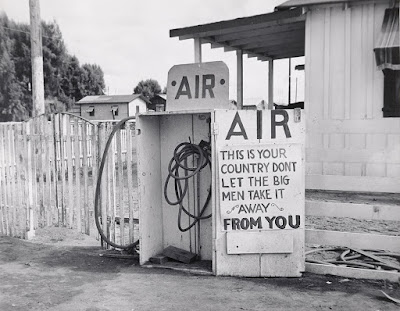 The picture above, by Dorothea Lange, appeared in The Wall Street Journal on January 4, 2020. It was originally taken in Kern County, California, in 1938.

In 1940, a couple of years after Lange took this photo, Woody Guthrie wrote, "This Land Is Your Land." That song has one verse in particular that pretty much makes the same point as the Lange photo. And, of course, the chorus makes that point, too:

This Land Is Your Land

[Verse 4]
As I was walkin' - I saw a sign there
And that sign said "No trespassin'"
But on the other side .... it didn't say nothin!
Now that side was made for you and me!

[Chorus]
This land is your land, this land is my land
From California, to the New York Island
From the Redwood Forest, to the Gulf Stream waters
This land was made for you and me.

There are many ways to make the point. We are, and we shouldn't forget it, all bound up together. Our money doesn't say "E Pluribus Unum" by mistake

We can't let all those "big men," the super-wealthy, buy away, and post and privatize, a country that truly does belong to us all.