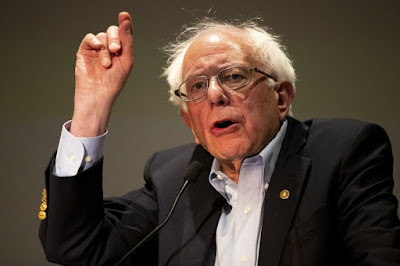 Louis Proyect, who calls himself an "unrepentant Marxist," has asked this question in one of his recent blog postings: "What does Bernie Sanders mean by political revolution, anyway?"

Of course, Proyect is not the only one who would like to know!

I was a delegate for Bernie Sanders at the Democratic National Convention in 2016. I am supporting his presidential candidacy this time around, too. What I like about Bernie is not his angry white guy finger pointing style, but his consistent insistence, over his entire political career, which started out at the local government level, by the way, that our government ought to be working for ordinary people, not for the "billionaire class," those persons who happen to own and run the big corporations that increasingly dominate every aspect of our national life.

As you can read in this 2015 article from the Guardian, which reports on a Sanders' speech in Iowa that year, Sanders' "political revolution" idea is not new. It's not a focus group adopted campaign slogan that Sanders thinks will likely be popular in 2020. In fact, let's admit it, someone who self-identifies as a Democratic "Socialist," and who is calling for some kind of "revolution," is intentionally swimming upstream against what passes for contemporary political wisdom. There must be something to it, right?

Obviously, someone should ask Bernie directly what he means by a "political revolution," but I think I have a pretty good idea. Hannah Arendt's book, On Revolution, which is probably my favorite book in the world, provides the answer. At least, that's what I think.

In her book, Arendt discusses the American Revolution, comparing it, explicitly, and favorably, to the revolutions in France and Russia. While admitting some truly great problems with our revolution (a baked-in acceptance of slavery is certainly the number one problem), Arendt notes that what happened in 1776 was a dawning realization by ordinary people that "we the people" are perfectly capable of governing ourselves. Genuine "self-government" can only be achieved by a "revolution," and the first step has to be our realization that we, collectively, should be running our affairs the way we want to run them. Thereafter, we need to follow up on that realization by an actual implementation of that idea.

When we first realize that WE have power, and, having realized that, we then insist that the power  we have be employed for OUR benefit, a "political revolution" can and will occur. That all happened back in 1776, and with the subsequent adoption of the Constitution in 1779, but the genuine "self-government" we then achieved (and it was flawed, as already noted) has lost its strength and potency. We still "think" self-government, and by now we know that this means women, people of color - everybody - but we are not, in fact, actually governing ourselves. The corporations and the "billionaire class" are running the show. We are not going to be able to transform our situation and deal with wealth inequality, the climate crisis, and the profound issues of social justice we need to confront until we actually make the government work for us, by taking it over ourselves. That's what I think Bernie Sanders means by a "political revolution."

A successful political revolution did occur in Santa Cruz County, at a time during which those with money and (apparently) power, were turning Santa Cruz County into a conquered province of the Silicon Valley. I was fortunate enough to be part of the effort by ordinary people to take back power, and to make the fundamental decisions about what our future should look like. I had read Arendt's book in college. When I showed up in Santa Cruz, in 1971, I saw it happening in real life - and with truly revolutionary consequences.

I am not afraid of that kind of "political revolution," and I have no illusions that it's easy. People actually have to believe that they can make their government do what they want, what benefits them, and not just succumb to what those with money and power say is "inevitable" or "necessary," and then, they need to spend time, and join with others, actually to participate in the political decision making process.

Making a "political revolution" is a big job, even at the local level. It is REALLY HARD at a national scale.

Nonetheless, I am here to testify that, hard as it might be, it can be done. And if we can all trust ourselves this election cycle, we can have the kind of "political revolution" that I know Bernie Sanders is talking about.

There are just a few days till the Iowa caucuses! Onward from there! If we truly want to change the realities (and we desperately need to), a political revolution is exactly what is required!