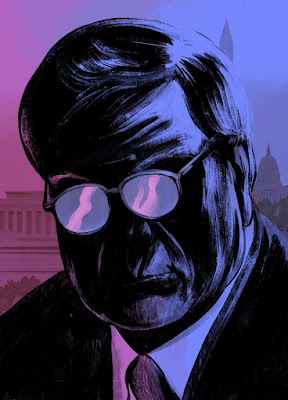 The New Yorker has published a profile of our Attorney General. The profile is titled, "William Barr, Trump's Sword And Shield: The Attorney General’s mission to maximize executive power and protect the Presidency."

David Rohde, who wrote the profile, is an American author and investigative journalist who currently serves as the online news director for The New Yorker. The portrait he has painted presents us with a relatively dark picture - dark and revealing, both. Rohde's article contains the following paragraph, near the end:


As Barr insists on expanded Presidential power, Republican voters are starting to agree. According to the Pew Center, forty-three per cent of Republicans believe that “presidents could operate more effectively if they did not have to worry so much about Congress and the courts.” That number has increased from fourteen per cent when Trump took office. A House G.O.P. report about Ukraine endorsed his singular authority; slightly misquoting John Marshall, it argued that Trump was, “constitutionally, the ‘nation’s sole organ of foreign affairs,’ ” and thus had unlimited latitude in his dealings with Ukraine (emphasis added).

Donald Ayer, a Deputy Attorney General in the Administration of George H.W. Bush, is quoted in the profile as saying that Barr’s understanding of executive power is dangerous:

In the 2020 campaign, Trump will argue that he alone can protect the country from the dangers posed by the left, immigrants, and other enemies. And Barr’s vision of Presidential power will be the Party’s mainstream position. “Barr sought out the opportunity to be Donald Trump’s Attorney General,” Ayer said. “This, I believe, was his opportunity—the opportunity of a lifetime—to make major progress on advancing his vision of an all-powerful Chief Executive.”

"All-powerful Chief Executives" can almost always give the impression, however erroneous, that they can "operate more effectively" than those who utilize the unruly decision-making processes that constitute a genuine democracy. "Unruly" is one thing, but it is actually quite important that our democratic government address the issues that concern the people. If it starts seeming that democracy doesn't work, and can't or won't address the problems that people actually care about, the idea that we should let our Chief Executive decide what to do, and how to do it, begins to seem more attractive. Indeed, the Pew Center survey seems to indicate that Republicans are coming to this conclusion in droves.

There is no doubt, in my mind, that this is a dangerous and deluded direction for our nation.

In other words, the stakes are very high right now, and our personal and active involvement in politics is required, if we don't want a series of "all-powerful Chief Executives" to run our lives.

Care about democracy? There are real problems that people care about, including the climate crisis, the housing crisis, medical care for all, income inequality, racial and social justice, and more. If we do not, ourselves, get personally engaged in the difficult process of solving these problems in a way acceptable to the majority, taking into account the positions and concerns of the minority, we may lose our democratic options, going forward.

So far, we are not being very "effective" in handling the challenges; at least that's my view, and if we don't start doing better, we know just where William Barr and Donald Trump want to take us.

Barr the door to that direction! That's my advice.