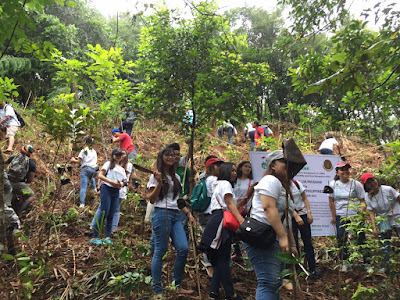 Nearly 7,000 people helped in the mass planting of saplings in denuded forest and grassland in the eastern province of Camrines Sur on Wednesday, said Mara Joneil Cordova, spokeswoman for El Verde (The Green) project.

"We had 64,096 trees planted in 15 minutes. This was certified by the Guinness Book of World Records that everything was accurate and correct," Cordova told AFP.

Wednesday marked the start of the provincial government-backed programme to plant 12 million trees in the logged forests of Camarines Sur by next year.

The planting, on government-owned land, is intended to stop erosion and restore watersheds, she said.

The forests of the Philippines are among the 10 most endangered in the world, according to global environment group Conservation International.


My wish, for the year just coming:

To Be Of Use
Marge Piercy

The people I love the best
jump into work headfirst
without dallying in the shallows
and swim off with sure strokes almost out of sight.
They seem to become natives of that element,
the black sleek heads of seals
bouncing like half-submerged balls.

I love people who harness themselves, an ox to a heavy cart,
who pull like water buffalo, with massive patience,
who strain in the mud and the muck to move things forward,
who do what has to be done, again and again.

I want to be with people who submerge
in the task, who go into the fields to harvest
and work in a row and pass the bags along,
who are not parlor generals and field deserters
but move in a common rhythm
when the food must come in or the fire be put out.

The work of the world is common as mud.
Botched, it smears the hands, crumbles to dust.
But the thing worth doing well done
has a shape that satisfies, clean and evident.
Greek amphoras for wine or oil,
Hopi vases that held corn, are put in museums
but you know they were made to be used.
The pitcher cries for water to carry
and a person for work that is real.

I have to say, I love those last two lines:

The pitcher cries for water to carry and a person for work that is real.


In the shadow of extinction, these is so much real work to do!