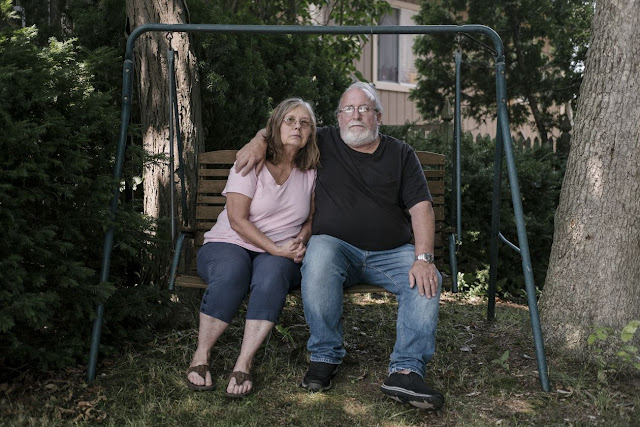 The October 12-13, 2019, edition of The Wall Street Journal included a heart-rending article with the following title: "The FBI Lost Our Son." It is a story worth reading.

Pictured above are the parents of Billy Reilly, who became enmeshed in dealings with the FBI. As best as can be determined, Billy Reilly was recruited by the FBI as an unpaid spy and double agent. He ended up trraveling to the Ukraine during the period in which active and armed conflict was underway betweeen the Ukrainian and Russian armies. It appears that Billy is now dead.

The Journal article tells a long story, and a sad one. The last line of the article encapsulates the Reillys' agony:

"You murdered our son," Mrs. Reilly yelled. "Don't ever talk to us again."

I think it would be fair to say that a large percentage of our population is enamored with the idea that the world is filled with spies, and counterspies. We have come to believe that this is a natural feature of the reality we inhabit - and an exciting one! A positive one! We celebrate spy culture in novels and films.

The movie Spy Games, for instance, starring Brad Pitt, "received mostly positive reviews from film critics" and did pretty well at the box office. That is an example of how we have incorporated a positive story about espionage and counter-espionage into our understanding of what our national government is doing to protect us. At least, we have come to think that all of our "security" agencies are, in fact, increasing our national security.

We ought to think more about whether glorifying the "spy game," or even tolerating it, is actually a good thing.

I tend to think not!