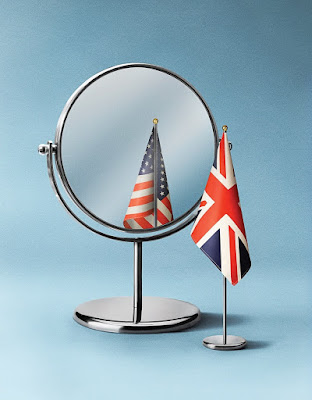 In the November 18, 2019, edition of The New Yorker, Isaac Chotiner analyzed the weird politics of the Brexit controversy in Britain. In the hard copy edition, Chotiner's article was titled, "Fires In The Mirror." Online, his article is called, "From Little Englanders To Brexiteers."

While Chotiner doesn't use the term "auto-immune disease," the subtitle to the hard copy version of his article proclaims that "behind the U.K.'s problems with Europe lies a struggle with itself." Chotiner suggests that there has been a strange resonance in the politics of the United States and the politics of Great Britain, ever since the days of World War II, and Chotiner implies that the United States, too, is struggling with itself. Personally, I would stipulate to that!

I actually have a hard time following the intricacies of the Leave/Remain debate in Britain, but it rings true that the debate in Britain has a lot to do with reactions to Britain's loss of imperial dominance during the Twentieth Century, which is one of Chotiner's main points. I think there is a lot to be said that a deep concern about the United States' role in the world is also driving our contemporary national politics. Our president, after all, ran on the slogan, "Make America Great Again," a slogan premised on the idea that America is no longer great.

John Vasconcellos, deeply engaged in California politics from the 1960s to the 1980s, kept pointing out the importance of individual "self-esteem," and he actually succeeded, at least for a brief time, in making "self-esteem" an important political issue in California. Without self-esteem, as Vascocellos argued, people go bad, and what is true on the individual level is true for states and nations, too. I don't think that there is any doubt that the United States, like Britain, is suffering from a kind of  national "identity crisis," based on our lack of any confident sense of national self-esteem. Because of our fundamental worries about our own worthiness (both individual and national), and faced with terrific self-doubt, we go out of bounds as we seek to assert, in a manifestation of defensiveness, our national greatness. This is just a technique to stave off a confrontation with what we fear may be the very different realities.

President Trump is the perfect spokesperson for efforts to deny, and thus surmount, our feeling of national inadequacy. He exemplifies in his person the kind of internal self-doubt that Chotiner is saying is driving politics in both Britain and the United States. Every statement our president makes comes out of defensiveness, and denies the truth of what is obvious. His mind reflects a "stable genius." His conversations with other heads of state are "perfect." More people attended his inauguration than ever attended an inaugration before. He is the healthiest person ever to have been elected to the presidency. And.... so on!

Why do so many voters apparently accept those profoundly inaccurate assessments? I think it is likely that this is a psychological strategy to stave off the deep-down feelings of both personal and national inadequacy that we don't feel comfortable discussing or confronting. Here you have me doing what the pundits do, trading in politics for psychiatry, given that it is hard to find much rational foundation for the kind of politics being practiced in the United States today.

In the last two paragraphs of Chotiner's article, he says this:

Trump has reanimated and crystallized the sense shared by many of his supporters that America is in decline, that others are responsible, and that only he can fix it ... It is not easy to decipher which country is following which in the latest transatlantic dance, but both America and the United Kingdom appear to be heading somewhere very dark indeed (emphasis added).

How does an individual (and thus, perhaps, a nation) deal with a profound lack of self-esteem? Muhammad Ali's frequently reiterated formula, "I am the greatest!" has always appealed to me. And I I have always liked that good advice from the personal growth gurus: "Fake it till you make it."

I think one solution to our national political problems (I can't vouch for how this would work in England) is to reassert that the United States is not "in decline," at all, and that we are (just now, in this amazingly important historical moment, as the future of human life on earth is in the balance) going to be leading the world.

I don't think that's fantasy. Our politics is "shit," to use a technical term. Our infrastructure is, too, thanks to fifty years of deferred maintenance. Income inequality is undermining even the dream of an "American Dream," and we continue to be responsible for spewing forth more life-destroying greenhouse gasses than any other nation on the planet. Things are looking "very dark indeed," to use Chotiner's phrase.

This is where we assert the opposite - but not "defensively," as the president does, making assertions that are unrelated to the realities we know, deep-down, are true. We need to make our assertiions as a pledge, and then follow through.

Since I hold, so strongly, to the insight that what we see as "observers" is quite different from what we can do as "actors," our assertions that we will do great things can be our way, as a nation, to restore a politics that asserts our human ability not only to "endure," but to "prevail." It is certainly a good way to recapture our national self-esteem.

I am making a reference, to those who might miss it, to the Nobel Prize Speech given by William Faulkner in 1950. Speaking to our national ability to "prevail," and to accomplish the great expectations that we need to validate, not denigrate, is exactly what I'd be talking about if I were running for president.

And I think that Bernie Sanders, and Elizabeth Warren, and Cory Booker (to name a few Democratic candidates) are doing just that. So is Alexandria Ocasio-Cortez, with her Green New Deal.

America will not be "in decline" unless we accept that diagnosis. I suggest we reject it. America is not, at its base, either racist or uncaring. We are not powerless and incapable in the face of all the challenges we know are real. We shall prevail!

My political advice to the candidates? Believe that, say that, and win!