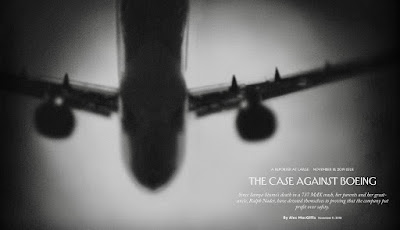 My blog posting yesterday was about a book, Platform Capitalism, that analyzed just how ruthless corporations have become in the Internet Age, as corporations conform to investor requirements that profit maximization drive every decision.

If you would like a slightly different example of how corporate profit maximization is working out in our contemporary society, I commend to you an article from the November 18, 2019, edition of The New Yorker. As you can see from the image above, the article is titled, "The Case Against Boeing." It is a harrowing tale, and well worth reading. Here's an excerpt:

Sorscher [Stan Sorscher, an engineer at Boeing and an official of the engineers’ union] recalled a labor-management breakfast ... at which a top Boeing executive said that the company would reduce spending on a program that employed engineers to find improvements in the process of making planes. Sorscher, a member of the union’s bargaining unit at the time, pointed out how much money process improvement was saving the company.

The executive tipped his head back, as if thinking how best to explain basic economics to a clueless scientist. Finally, as Sorscher recalled, the executive said, “The decisions I make have more influence over outcomes than all the decisions you make.” Sorscher told me, “It was: ‘I can’t help but make a billion dollars every time I pick up the phone. You people do things that save four hundred thousand dollars, that take one shift out of flow time—who gives a crap?’"

Well, people who fly on Boeing planes (or who won't do that anymore) might be among the number of people who "give a crap." If the Boeing corporation follows the example of its MAX 8 plane, and crashes and burns (a fate exceedingly well deserved from everything I know), Boeing's corporate demise will be due to a drive for "profit maximization" over service to the public. In this case, "service to the public" translates quite directly into "passenger safety."