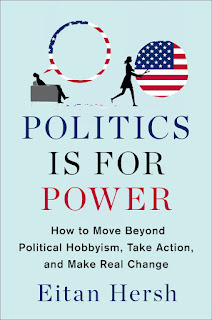 A friend recently sent me an excellent article published in the Boston Review, "Politics is For Power, Not Consumption." I have a feeling that if you read the article you won't need to buy and read the book shown to the right. I haven't read the book, but I am definitely recommending the article!

Eitan Hersh, who is an Associate Professor in the Department of Political Science at Tufts University, says that when people engage in genuine political work there is only one reason they do that: they want power. If you aren't trying to obtain political power then you are not really engaged in politics, according to Hersh. Instead, you're a "political hobbyist." Hersh thinks that this is not a good thing. His article explains why.

I tend to think that those engaged in what Hersh would call "genuine," non-hobbyist political work are not so much seeking out power as they are exercising power they already have. If we want to take self-government seriously, then we need to understand that we (both individually and collectively) have power already. One person's power is relatively small, of course, but in the course of political organizing, as we combine our individual political power to achieve a particular political purpose, we increase our power. In other words, I basically agree with Hersh, but I want to start from an acknowledgement that we are not "lacking" power which we want to acquire; instead, we are mobilizing the power we already have.

At any rate, my main point in publishing this blog posting is to encourage anyone reading my blog to read Hersh's Boston Review article, too. Here is a small sample from the article, which I particularly liked:

Each vote may seem like an insignificant drop in a 135-million-vote bucket, but the group labors with the knowledge that it is working in concert with like-minded organizations across the state and country each doing its part. The group also knows, and sees, that opposing groups, with very different values, are also getting supporters for the other side. They are in a pitched battle with one another, each seeking political control.

What they’re all doing, that’s politics.

I often think of groups like this during evenings I spend on my couch. As I fold laundry half-heartedly, I watch TV and clutch my phone. I refresh my Twitter feed to keep up on the latest political crisis, then toggle over to Facebook to read clickbait news stories, then over to YouTube to see a montage of juicy clips from the latest congressional hearing. I then complain to my family about all the things I don’t like that I have seen.

What I’m doing, that isn’t politics.

Most of us are engaging with politics to satisfy our own emotional needs and intellectual curiosities. That’s political hobbyism.

What I’m doing I call political hobbyism, a catchall phrase for consuming and participating in politics by obsessive news-following and online “slacktivism,” by feeling the need to offer a hot take for each daily political flare-up, by emoting and arguing and debating, almost all of this from behind screens or with earphones on. I am in good company: these behaviors represent how most “politically engaged” Americans spend their time on politics.

I think Hersh's analysis is right. If you are truly politically "engaged," that means that you are in actual, personal contact with other real people, working together to accomplish a political goal.

Would you believe me if I told you that real politics, as Hersh defines it, is lots of fun?