#315 / Gates And Rates: The "Perturbed Plutocrats" 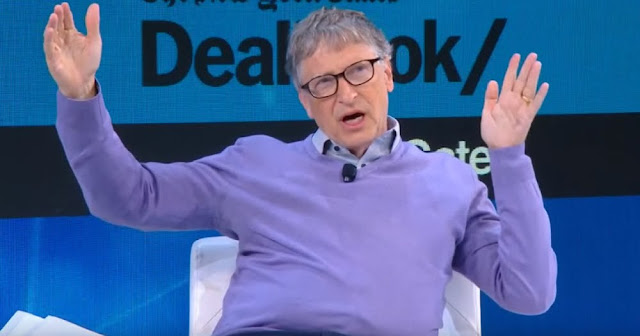 Let me follow up my blog post yesterday, which I titled, "The Billionaire Boys Club." On Sunday morning, when I picked up the papers, I was happy to find the following editorial in The New York Times. I have copied The Times' editorial, in its entirety, below.

It seems that The Times has noticed that the billionaire class is getting just a little bit restless. I endorse the newspaper's response to these "perturbed plutocrats!"

When Bill Gates founded Microsoft in 1975, the top marginal tax rate on personal income was 70 percent, tax rates on capital gains and corporate income were significantly higher than at present, and the estate tax was a much more formidable levy. None of that dissuaded Mr. Gates from pouring himself into his business, nor discouraged his investors from pouring in their money.

Yet he is now the latest affluent American to warn that Senator Elizabeth Warren’s plan for much higher taxes on the rich would be bad not just for the wealthy but for the rest of America, too.

Mr. Gates, the co-founder of Microsoft, suggested on Wednesday that a big tax increase would result in less economic growth. “I do think if you tax too much you do risk the capital formation, innovation, U.S. as the desirable place to do innovative companies — I do think you risk that,” he said.

Other perturbed plutocrats have made the same point with less finesse. The billionaire investor Leon Cooperman was downright crude when he declared that Ms. Warren was wrecking the American dream. Jamie Dimon, the chief executive of JPMorgan Chase, complained on CNBC that Ms. Warren “uses some pretty harsh words” about the rich. He added, “Some would say vilifiessuccessful people.”

Let’s get a few things straight.

The wealthiest Americans are paying a much smaller share of income in taxes than they did a half-century ago. In 1961, Americans with the highest incomes paid an average of 51.5 percent of that income in federal, state and local taxes. In 2011, Americans with the highest incomes paid just 33.2 percent of their income in taxes, according to a study by Thomas Piketty, Emmanuel Saez and Gabriel Zucman published last year. Data for the last few years is not yet available but would most likely show a relatively similar tax burden.

The federal government needs a lot more money. Decades of episodic tax cuts have left the government deeply in debt: The Treasury is on pace to borrow more than $1 trillion during the current fiscal year to meet its obligations. The government will need still more money for critical investments in infrastructure, education and the social safety net.

This is not an endorsement of the particulars of Ms. Warren’s tax plan. There is plenty of room to debate how much money the government needs, and how best to raise that money. The specific proposals by Ms. Warren and one of her rivals, Senator Bernie Sanders, to impose a new federal tax on wealth are innovations that require careful consideration.

But a necessary part of the solution is to collect more from those Americans who have the most.

And there is little evidence to justify Mr. Gates’s concern that tax increases of the magnitude proposed by Ms. Warren and other candidates for the Democratic presidential nomination would meaningfully discourage innovation, investment or economic growth.