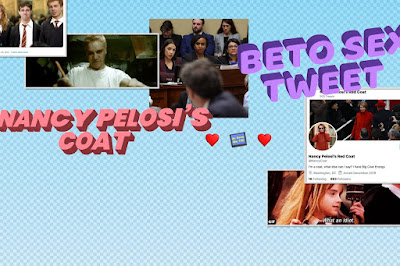 stan, n. - An overzealous or obsessive fan of someone, esp. a particular celebrity.

The New York Times wants to improve our vocabulary, all the better to help us understand our parlous political situation. In a special section published on Thursday, September 12, 2019, The Times talks about the "Stanning of American Democracy." For those not acquainted with the word "stan," the newspaper defines it, as above.

The contents of The Times' special section is presented in two different articles in its online edition. "United We Stan" provides the argument. "How Fan Culture is Swallowing Democracy" provides examples.

Amanda Hess is responsible for both articles, which have been joined together in a special section in the print edition of The Times. Hess suggests that our democracy has been "reimagined" as fandom. She goes even further, in fact, to suggest that such "fandom" is now "the dominant mode of experiencing politics."

I commend these articles to you. They are definitely worth reading, and worth thinking about. They are fun, too! I subscribe to The Times, so I never have any trouble accessing their online content. I hope those reading this blog posting will be able to penetrate any paywall obstacles that The Times may have erected for non-subscribers. The questions that The Times is addressing are important.

Absent your recourse to the originals, here is my brief synopsis: Hess and The Times are arguing that our politics has now been swallowed up by our appetite for "entertainment," and that serious politics, and serious news, have now pretty much disappeared, as we all turn into "fans" of the political views that most appeal to us. More and more, we use "memes" both to promote and to oppose the political actors whom we either like, or dislike. Reasoned discussion and debate is disappearing, and our "Ship of State" is heading for the rocks.

Let me restate that.

In view of the fact that the American electorate has placed Donald J. Trump into the presidency, I think Hess and The Times are actually saying that we have definitively "hit" the rocks. Many of those reading this blog posting would probably concur. Unfortunately, if you agree with this observation, The Times goes on to suggest that the phenomenon is not limited to our current president. All the major Democratic Party candidates have turned into "memes," the way The Times sees it, and that means that The Times doesn't see any help on the horizon. We are "on" the rocks, in other words, not just "heading that way."

My reaction to The Times' analysis turns on my belief that any genuine politics depends on us understanding that the role of a citizen is to be an "actor," not an "observer." As long as we relate to politics by "experiencing" politics - which is the way The Times characterizes politics, in the quotation I have provided above - democracy is definitely "on the rocks" with no good future in store.

We are not, however, only "observers" of the world. We create the world through our own actions, and that is what it takes to be a citizen: ACTION.

And the time for that action is NOW.