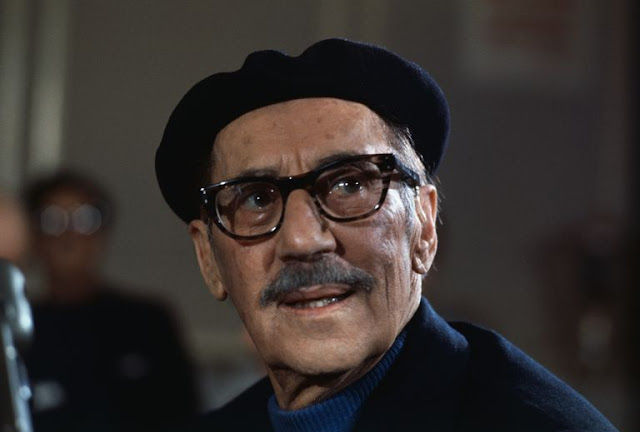 Who are you going to believe, me or your lying eyes?

Groucho Marx, widely believed to have been one of America's greatest comedians, may well have been the one who asked this question first. Groucho is pictured above. Supposedly, this question about who to believe was posed by a husband to his wife, right after the wife caught the husband in flagrante delicto with another woman. My research (quite brief) has not actually resolved the question of provenance. Other attributions are also common.

I got to thinking about this quote (which suggests that the truth might be something quite different from what you see) as I read an article published in Amor Mundi, the weekly blog of the Hannah Arendt Center at Bard College. The article, by Uday S. Mehta, poses this question: "Is Lying A Political Virtue?"

Mehta teaches political science in the Graduate Center of the City University of New York (CUNY), and his article contrasts the views of Hannah Arendt with the ideas of Mahatma Gandhi. Those persons who might be surprised to learn that Arendt can credibly be cited in support of the proposition that lying is a political virtue, might want to check out what Mehta has to say. Gandhi believed in satyagraha, of course, and so he is definitely an advocate for "clinging to the truth" in every situation.

I have always considered Arendt to be an extremely truthful person, a truth-teller to the core. How is it, then, that she can say, "Truthfulness has never been counted among political virtues, and lies have always been regarded as justifiable tools in political dealings?" This quotation from Arendt, featured in the very first paragraph of Mehta's article, is meant to suggest that Arendt justified and approved, however reluctantly, the use of lying as a "virtue" within the political realm.

Is this a fair interpretation? I think not. Arendt is describing the reality of political life. She is speaking, in other words, as an "observer." Gandhi almost never spoke as an "observer." In Gandhi's writings, he does not formulate his main point as a description of "how things are." Gandhi almost always speaks as an "actor," outlining what he thinks would be the right thing to do in whatever situation he is discussing.

As I have developed my personal philosophy of politics and life, I have come to see that this distinction between being an "observer," and being an "actor," is a distinction of critical importance. In his Eleven Theses on Fuerbach, Marx makes the point quite well:

The philosophers have only interpreted the world, in various ways. The point, however, is to change it.

I am with Marx on this observation! Call me a "Marxist" if that makes you feel good!

I don't know if Arendt ever said anything about this quote from Eleven Theses on Fuerbach, but she would not, I think, have ever put herself forward as an "activist," or as a political "actor." Gandhi, of course, would have. Gandhi wanted to change the world, not just describe all of its problems and possibilities. I am with Gandhi on that!

Lying is a fact of life in politics - at least in the kind of politics with which we are most directly acquainted. So when Arendt provides a description of politics, Arendt is absolutely correct in what she says. I know of no statement by Arendt, however, and Mehta doesn't advance one, in which Arendt suggests that lying is a positively "good thing," in the political realm, and thus is virtuous in that sense. I know what Machievelli would say, but I don't recall any statement from Arendt that suggests that we, as "actors," should make use of lies whenever convenient to achieve a laudable political goal. But aside from what Arendt says, what about Machievelli? Should we, in fact, fill our politics with lies to achieve positive poltical objectives? It's an important question.

I think of things from an "actor's" perspective, and the question of whether or not we should we lie to achieve what we have convinced ourselves will be positive political results needs to be taken quite seriously. It's a typical "ends and means" question: do the "ends" justify the "means?" My own bias (built upon my Quaker experience) is definitely on the side of Gandhi. As I recall an antiwar slogan from my youth: "There is no way to peace; peace is the way." In a very similar fashion, I profoundly doubt that it is possible to lie one's way to any political result worth working for.

Mehta's article points out that our "politics" is, largely, a Hobbesian construction, and that we establish political entities, and then defend them, based on fear. We fear that without a political entity to shield us from other individuals (and then from other political entities), we will be exposed to and succumb to violence. Thus, we need to band ourselves together, and to defend ourselves at all costs (including by way of using violence ourselves). Building our politics upon lies is definitely helpful, as we try to defend ourselves against an endemic fear that permeates every aspect of our common life together.

Mehta's article is worth reading. It certainly made me think about the role of truth in politics. But then, what about that question I pose at the top of this blog posting? Do you believe ME, or your lying eyes?

If our political life together is, in fact (as Arendt says), inherently influenced by lies, then what do we "see," when we confront our politics as "observers?" We see "lies," of course, and what we "see" should not, in fact, be believed. Our "eyes" do lie to us about the ultimate nature of our political relationships. What we hear from Congress, the President, and the press is almost certainly a compound containing much untruth. "Fear" has distorted the actual truth of our political life, so we no longer believe that we can, by simply joing togethert in political action, create a new and different human reality.

When I tell you that politics is the salvation for us all, and when I say that joining together in direct political action - person to person - can and will redeem our world, I want you to believe me.

So who are you going to believe?

Me, or your lying eyes!