#230 / How Not To Address Our Housing Crisis

On Thursday evening, August 15, 2019 (and actually continuing into the next day, since the meeting got over at almost 1:00 a.m. on Friday morning), the City of Santa Cruz Planning Commission considered a proposed development at 190 West Cliff Drive.

That address is right across the street from The Dream Inn, and is at the corner of West Cliff and Bay Avenue. An extremely idealized picture of how the proposed development would look is prented above. The picture does not show the effects of current traffic conditions, pictured below, in a photograph taken on August 12th, at a little before 3:00 o'clock in the afternoon. The proposed development, which would include commerical as well as residential elements, would certainly make the existing traffic sitution worse. 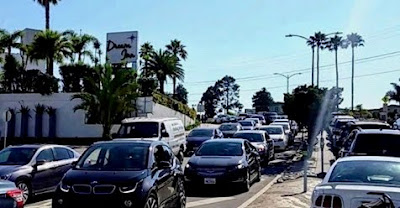 The Santa Cruz Sentinel published a report on the meeting, and quoted someone named Hooker as providing what may have come across to Commissioners as a good reason to approve the project - the need for more affordable housing in a community currently suffering from a genuine housing crisis:

"I think that we have a housing crisis in Santa Cruz, we have a housing crisis in California,” speaker Hooker told the commission ahead of its vote. “We need to deal with it here, and this is one spot where we can actually make a difference and I think we should figure out a way to approve this project, and at the same time mitigate as many of these possible concerns that have been raised.

A housing crisis we definitely do have, as Mr. Hooker said, both here in the City of Santa Cruz and throughout the state. But the Commission's 3-2 vote in favor of the proposed project was not really a vote in favor of doing something about it.

Our housing crisis is not characterized by the lack of luxury housing. We have plenty of that. Except for required "inclusionary" units, the eighty-nine housing units that the proposed project will produce will definitely not be affordable to any average or below-average income resident. The new housing units, in a prime location adjacent to the beach, will be purchased by the ultra-wealthy, and most of these units will become second-homes. The Commission was asked by one Commissioner, Andrew Schiffrin, to apply local ordinances and state law in tandem, so as to increase the number of dedicated affordable units from ten to eighteen. This effort was rejected. The upshot of the Planning Commission's deliberations was to approve seventy-nine luxury condominiums and ten affordable units.

This doesn't make the project, as approved, look much like a solution to our affordable housing crisis. Mr. Hooker's comment may well have been sincere, but the Commission was certainly not emphasizing its concern about affordable housing in its action on the application.

Not only did the Commission not vote to require the maximum number of affordable units that might be justified under state law and the local zoning ordinance, the proposed development is immediately adjacent to a mobilehome park that provides genuine affordable housing for current city residents. The chances are very good that actual construction of the proposed new project would ultimately lead to the removal of this mobilehome park, the desirability of which would be massively impacted by the proposed high-rise luxury development next door. In short, approving this project could well actually reduce affordable housing opportunities in the city, over even a relatively short term.

The Santa Cruz City Council will now have an opportunity to consider this proposed project, apparently on a date in September. Maybe the Council, as opposed to the Planning Commission, will understand that building high-density luxury housing units, adversely impacting existing affordable housing, and minimizing, instead of maximizing required inclusionary affordable housing, is NOT the way to address our housing crisis.