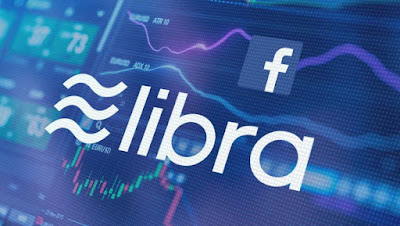 Zachary Karabell, writing in The Wall Street Journal, makes the pitch on "Why We Should Like Facebook's Cryptocurrency." Maybe you can make it through the paywall to see what Karabell has to say. There is no paywall present on the Forbes website; at least, I don't think so. Thus, you can get the views of a selected composite of high-tech entrepreneurs by reading "What Blockchain Executives Think About The Uproar Around Facebook's Libra." Clicking on the link will take you to a blog posting by Joressa Blount.

I, instinctively, resist the idea of putting my money into any system I don't understand, and "blockchain" is not something I understand. And that is not for the lack of trying! In addition, having observed the ups and downs of Bitcoin, it seems to me that this "cryptocurrency" idea is premised on the idea that your account is not a "store of value," but an "offer to speculate." From what I have seen, if you had put $1,000 into Bitcoin at a certain point, you might have ended up with $10,000 at another point. Fantastic! You might also have ended up with $0!

The Wall Street Journal article on Libra, which is the name for Facebook's proposed new cryptocurrency, gave me another reason not to like the whole idea. Here's an excerpt from The Journal's article:


In the long run, Libra and the legacy cryptocurrencies could potentially replace ... the sovereign power of states over currency ...

Facebook says that is has no intention to overturn the current system, and its Libra consortium currently includes major payments players such as Visa and PayPal. The company is attempting to allay the concerns of both governments and established banks.

Why ... are governments in such a tizzy? Because they understand that once in place, there may be no way to prevent a sophisticated, widely adopted cryptocurrency system from evolving into something much more far-reaching.

Would that be a bad thing?

States have been the foundation of economic prosperity for the past century. The creation of regulations governing the marketplace, the launch of a global monetary system after World War II, the taming of banks and the establishment of relatively stable currencies in affluent countries—all were part of the mix.

No one would argue, however, that this system has solved all problems or that most societies are at peak prosperity. Will states and banks in their current form, or some new financial technology, lead to the next great wave of economic improvement? ...

Perhaps it is time to shift our attention from the admitted risks of cryptocurrencies to the astonishing opportunities they could create (emphasis added).

Currently, our monetary system is directly and inevitably connected to our government. This means that where our money is concerned, "we are all in this together," and we thus have an opportunity, utilizing the powers we have as citizens, to make decisions about how the system works.

As we know, the government is hugely and disproportionately responsive to those who have the most money. We saw that in 2008. In the inimitable words of Ry Cooder, when our monetary system was on the brink of collapse, "no banker was left behind." Cartoonist Tim Eagan dramatizes the same message this way: 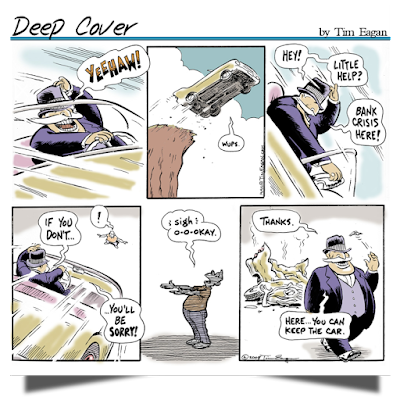 Unfortunately, the ordinary people didn't get the same treatment as the bankers and the money managers. The Obama Administration saved the banks, but those homeowners who made bad choices lost everything. If you don't think that this governmental response to the 2008 financial meltdown had something to do with the 2016 election, you and I are not seeing the world in quite the same way.

In other words, The Wall Street Journal article is correct that our current system, tied to government, has some real problems. Our government is not, really, working for ordinary people. While transforming our monetary system into an Internet-based system that it totally "individualistic" may be a good way to show our disdain and disgust about past and current governmental performance, do we really want to discard, forever, the opportunity to make our democratic system work for ordinary people?

I do think that we are "in this life together," whether we like that or not, and that thinking that "individualistic" and "market-based" approaches to our problems will give us better results is a massive illusion. Detaching our monetary system from governmental control means that we will lose the chance, forever, to make democracy work for the ordinary people.

Not a good choice, the way I see it!