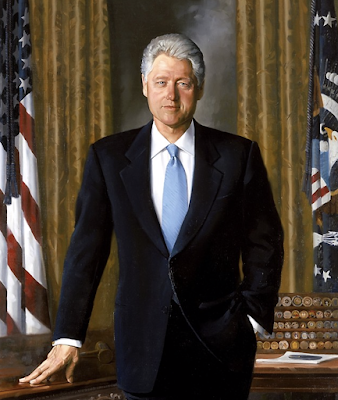 A recent article in Truthdig, "American History for Truthdiggers: Bill Clinton, The 'New Democrat,'" does not paint a very pretty picture of our former president. Here is a brief excerpt:

Clinton loved politics; he was known to talk endlessly into the night about the intricacies of policy. However, that mastery did not extend to his abilities as a boss. He had an awful temper, often lashed out at staff and seemed ill-disciplined and out of his depth early in his first term. Many staff members found him self-pitying, narcissistic and laser-focused not on values or issues but on opinion polls, his own political standing and re-election. Clinton was perhaps America’s first permanent campaigner president, setting the tone for his copycat successors in an age of tribal political partisanship. He was good at it too. A master of media “spin” and carefully crafted talking points, it was no accident that he would quickly be nicknamed “Slick Willie.”

This portrait, with its emphasis on President Clinton's "narcissism," the "ill-disciplined" nature of his conduct in the office, and his focus on his own political standing as his main concern, makes me think about the current occupant of the White House, who has been similarly (and accurately) described.

The description of Clinton's presidency goes on. It is quite lengthy, and it is not very flattering. However, even though I think that this unflattering evaluation of Clinton as president is pretty much on target, I would trade Bill Clinton for our current president in a heartbeat!

What I think may be the most important lesson, though, as I read through the thirty-five episodes (so far) of "American History for Truthdiggers," is how much we should stop focusing on "the president" as the definition of what our politics is all about.

Abraham Lincoln got it right. What we actually need to focus on is a commitment to protect and preserve a government "of, by, and for the people," and we need to direct particular attention to those "of" and "by" components. If we want to preserve democratic self-government, we need to realize that it's not about "the president." Self-government demands that we get involved ourselves.

"Voting" is not what I am talking about, either.

We do need to vote. No doubt about it. Voting is necessary.