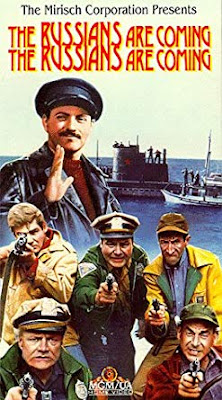 I DO remember the title of this movie, which I think was quite popular. That movie came to mind as I reviewed the newspaper coverage of the testimony provided to two different Congressional Committees by Special Prosecutor Robert Mueller. I didn't watch the hearings as they happened, but I did pay attention to reports in the press, and to reports online. As far as I can tell from the sources I consulted, those who watched the proceedings had three different "take-aways" from the Mueller testimony:

Frankly, I am not very much persuaded that hysteria is called for, as we consider Russian efforts to interefere in our electoral process. I have a couple of thoughts about this, which I will outline in the next section of this blog posting, but I want to begin by confessing that my thoughts are probably linked to my recollection of the phenomenon that was satirized in the 1966 movie. For decades during my youth, the United States government used fear of "the Russians" to promote public support for the military-industrial complex, with the result ultimately being our current commitment to constant war.

I do think this is a fair statement, though I do admit that there were real national security threats from the Soviet Union. I also realize that after the collapse of the Soviet Union there was a general sentiment that "the Russians" were no longer the world-ending danger they once had been. That granted, I am definitely a "once bitten, twice shy" kind of person. The need to generate some sort of hysteria to support our military adventurism seems to be a constant in our national policy discussions, and once "the Russians" were no longer much of a credible threat, national leaders scouted out new dangers to motivate our military expenditures.

Maybe it is "the terrorist Muslims," now, but the same mechanisms are still at work, and it was a government-supported fear of "the Russians" that propelled us from our alliance with Russia in World War II to the hysterial reactions that led the United States to become the military behemoth that we are today.

I am suspicious about resuscitating this framework for understanding the world, and I would not be pleased if it turns out that some Democrats might want to try out this old hysteria-generating slogan for a new-found political purpose. In other words, I am resisting the idea that our politics and our electoral system is fundamentally threatened by "the Russians," and my reluctance to think that this is a major threat comes from my past experience, in which a hysterical fear of "the Russians" was used for what I consider to be demonstrably bad purposes.

But let's directly address "the Russians are coming" concern about our current political process.

First, I completely agree that we should try to prevent any foreign interference in our elections, and that it is quite likely that "the Russians" are, indeed, trying to influence them. Hysterical reactions, however, are probably not called for, in my opinion. If we want to be somewhat "realistic" about it, nations are always trying to affect the outcome of the elections held in other countries, as a way to advance the national interests of the nations doing the interfering. There is nothing new here. Let me also say that the United States probably leads the world in interfering in other nations' elections.

The integrity and health of our electoral process depends, in large part, upon two things: (1) encouraging and facilitating voter participation, and (2) making sure that when votes are counted, they are counted honestly.

Forces from within the United States are actively working to discourage voter participation, and to disenfranchise voters by imposing requirements that make it difficult to register and actually to vote. Gerrymandering districts so people are discouraged from voting because the districting process has devalued their vote, is another technique proven to discourage voter participation. Unfortunately, the Supreme Court has largely been letting such techniques proceed. I think these problems are likely to be a lot more significant than anything "the Russians" are trying to do. Republicans, in other words, and not "the Russians," are the ones who seem to be carrying out such efforts most successfully.

Efforts to prevent a fair count of the votes cast have also been linked, recently, to Republicans, not "Russians."

As I have understand the kind of "Russian" interference that Mueller discovered in the 2016 election, and that he found is likely to continue, the efforts were largely characterized by use of the Internet, and a "big data" analysis of the voting rolls, to launch messages to individual voters that either convince them not to vote for a Democrat, or not to vote at all, or make them want to vote for a Republican. While foreign nationals should not be doing this, and we should try to catch them, if they do, and should try to prevent them from trying to influence our elections, the kind of techniques reportedly used by "the Russians" are exactly the same kind of techniques that domestic candidates and campaigns are also using.

There may have been something more, too, according to a a "breaking" New York Times' report, released on July 25, 2019. That would definitely be serious, and we must do everything possible to maintain the security of our voting systems. Again, though, it looks like the Republicans, not "the Russians," may be the biggest obstacle to securing our voting systems.

In order to have a healthy democracy, we are going to have to be sure that our ballot counting processes have integrity, and we also need to address the way that modern techniques of persuasion are undermining our political and electoral process. Threats to our democracy are real, but let's not think that it's all about "the Russians."

Read this article by Zeynep Tufekci if you would like to learn a little bit more about some of the main threats to our contemporary political and electoral system!