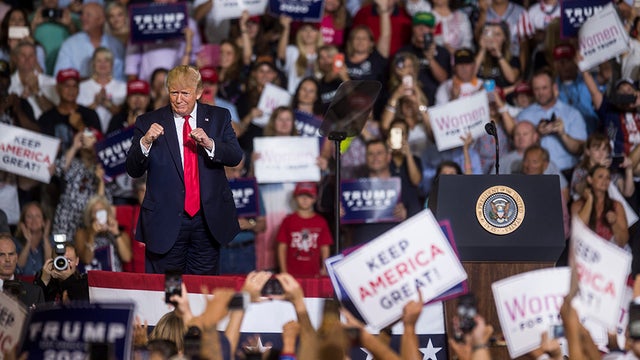 Kathleen Parker writes political columns for The Washington Post. Wikipedia calls her a "center-right" columnist. On July 19, 2019, Parker's column was titled, "Those who don’t condemn Trump’s racism are complicit in his bigotry." The Santa Cruz Sentinel, my hometown newspaper, ran Parker's column under the title, "The color of her skin."

Since I have recently read a book that claims that a politician, to be successful, needs only to know the right "three words," and how to use them, I was struck by Parker's focus on the three words that Trump supporters seized upon during his recent rally in North Carolina, as he denounced Congress Member Ilhan Omar:

Parker correctly observes that this chant is almost identical to the three-word chant that helped propel Donald Trump to victory over Hillary Clinton, and that was what might be called the "theme song" of Trump's 2016 presidential campaign:

"Chants" are motivating for crowds (and help convert crowds into mobs). Parker's column reminded me of a chant described in one of the most powerful books I have ever read, William Golding's Lord of the Flies.

Lord of the Flies was first published in 1954, and I read it in high school. It may not be much remembered now. If you are not familiar with the book, I recommend it. Wikipedia provides a brief summary for those who would like a shortcut. The three-word chant that became the "theme song" of Lord of the Flies, and that helped convert a bunch of British boys into a mob consumed by blood lust, is of the same genre as the three-word chants that are motivating the Trump campaign:


An online resource, eNotes, provides "homework help" to students, as they try to figure out what their assigned readings are all about. Here is what eNotes has to say about the chant adopted by the boys in Lord of the Flies:

The vocabulary in the chant indicates their savage nature. They had ceased to be civilized British schoolboys and were now true savages, also indicated by their earlier decision to paint their faces and carry sharpened sticks. The words "kill," "cut," "spill. . . blood," and "bash" are not terms one would expect from well-behaved and orderly individuals. The words denote a brutal desire to hurt and maim. The real purpose of the hunt -- to get food -- is forgotten.

The boys are now driven by an innate lust for blood. The chant becomes part of a ritual in which the boys play a hunting game. Roger becomes the game's first victim, and he is hurt by the other boys when they prod at him while uttering the chant. Even Ralph and Piggy are later overwhelmed by its power and participate in the game during a fierce storm. The extent of their innate savagery is displayed to its fullest when they, with the other boys, kill Simon on the beach.

In conclusion, the chant becomes a symbol for the boys' savagery. Its hypnotic rhythm brings them in touch with their innate desire for blood and destruction. Once they start the chant, they lose all reason and become a beastly mob, intent upon wreaking havoc (Emphasis added).

Hitler only needed two words, which transformed a nation. Chant politics are dangerous!