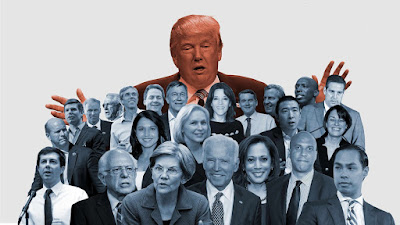 Dylan Matthews, who writes for Vox.com, has authored an article that I have not been able to locate on the internet, but which I received as an email bulletin, headed by the title I have reproduced above. Here is Matthews' basic recommendation:

What none of them have is a plan to pass those plans if, as appears likely, Republicans continue to control the Senate. The unstated but universally known truth about a world where President Biden/Sanders/Warren/Harris serves alongside Senate Majority Leader Mitch McConnell is that no major legislation will ever get passed.

That means 2020 contenders should be doing a lot more thinking about how they can achieve their policy aims without Congress, using existing laws and executive powers. I have a couple of suggestions for where to start if candidates want to reduce poverty.

I would like to suggest that this plan to make future policy changes by executive action should NOT, in fact, be the way that the Democratic Party and its candidates approach the 2020 election. We, as voters, should not be approaching the upcoming election in this way, either.

Democracy in the United States has, from the start, been based on the idea that Congress, not the President, should be making the key policy decisions that determine what our government will do. I am not ready to abandon that idea.

If we give up on the idea that policy should be made by Congress, and are prepared to have government operate by Executive Order, we are really saying that it's just fine for an elected president to do the kind of things that Donald Trump is doing. Democrats, of course, would like the president to do other things, not what Trump is doing, but the "process" as well as the actual decisions made, is important. A governmental system that allows our elected president to act like a "ruler," and individually to decide all the most important issues, will NOT end up being good for the people.

You will remember, I am sure, the shorthand formula for good government so wonderfully articulated by Abraham Lincoln. We must have a government that is "of, by, and for the people." That is the kind of government that America has had every right to be proud of since 1789. I am not willing, in the name of pragmatic expediency, to give up on that idea.

Where does that leave the Democrats? The Democrats need to make the 2020 campaign a campaign to change the government, not just the president. That means that the Democrats must do all in their power to reassume control over the United States Senate, while maintaining control in the House of Representatives. This is precisely what presidential candidate Michael Bennet called for, during the June 26th Democratic Party debate.