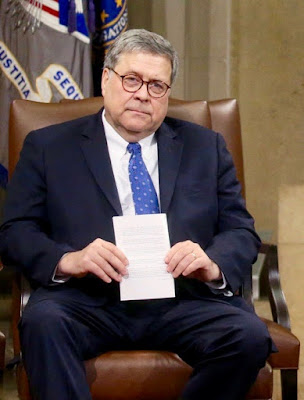 On June 10, 2019, The New York Times published an extensive article about Attorney General William Pelham. Barr. One major focus of the article was to examine whether or not Barr is a "straight shooter." That Barr is a "straight shooter" is one theory. Another theory is that he is a servile supporter of President Trump, and that Barr is seeking, in all he does, to protect the president who appointed him.

Having read the article in its entirety, I do think it is clear that Barr has been a longstanding supporter of the Republican Party, and that he sees himself as a defender of Republican Party presidents. However, there may be some principles to go along with Barr's partisanship. I found the following statement in The Times' article to be the most explanatory ablout what motivates Barr:

[Barr] clerked for Malcolm R. Wilkey, a noted conservative judge on the federal Circuit Court of Appeals for the District of Columbia. Five years earlier, Judge Wilkey had dissented from the court’s historic opinion ordering President Richard M. Nixon to turn over his secret Watergate tape recordings, arguing that discussions between a president and his advisers are protected by “absolute privilege.”

Like the judge, Mr. Barr came to embrace an aggressive view of presidential powers outlined in Article II of the Constitution.

“Bill’s natural default is Article II,” said Mr. Turley,* a defender of congressional powers defined in Article I. “He views a strong executive as more needed than ever to stabilize the country and the world at large.”

Article II references the part of the Constitution that outlines the powers and responsibilities of the Executive Branch. Article I does the same for the Legislative Branch, and Article III outlines the powers and the duties of the Judicial Branch. Barr gives primacy to the Executive. I am willing to concede that he does so, for the most part, in good faith. He actually believes that the nation needs "a strong executive...to stabilize the country and the world at large." When you look at Congress you can see why a person of good faith might come to this conclusion.

The reason that people of good faith might want to protect the powers of the Executive is that the Congress has been so clearly dysfunctional for so long. Yet, it is only by insisting that our government take action based upon legislative decisions, arrived at in Congress, that we will ever be able to preserve democratic self-government. The "Executive" is supposed to "execute" legislative decisions, not to decide what the nation should do. When the Legislative Branch dodges the issues (as it has been doing for years, with its refusal to make the key decisions on going to war as a prime example) someone needs to take control. Hence, we have Bill Barr and many others justifying the right and privilege of the president to make "absolute" decisions.

My title on today's posting, "Barr Exam," is not really meant to suggest that we need to examine Bill Barr. The Times' article does that, and that's fine, but I think we need to examine our Congress, because by failing adequately to carry out its duties as the "representative" branch of our government, we are, perforce, turning over the immense powers of the United States government to any narcissistic prevaricator who may beguile the voters to install him as President.