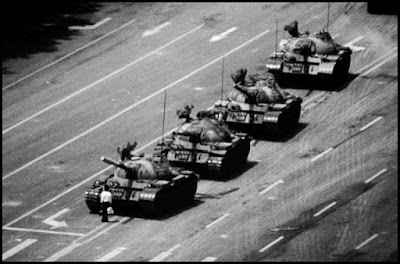 "What Have We Learned Since Tiananmen?" That is the question posed in the headline to a New York Times opinion piece published on June 2, 2019.

The column was written by Wang Dan, one of the leaders of the Chinese democracy movement that was decimated by a military attack by the Chinese army on unarmed student protesters gathered in Tiananmen Square, in Beijing, on June 4th and 5th in 1989. For those who don't remember the Tiananmen Massacre, or who never heard about this world-changing event, click this link for some background.

I found the following statement in Wang Dan's opinion piece quite poignant:

Our movement failed 30 years ago because we lacked support and experience in promoting democratic change. Many of us had pinned our hopes on the liberal factions of the Communist Party leadership to initiate changes from within the system, but we underestimated the power of the party elders. The massacre shattered our illusions, helping us see the brutality of China’s one-party rule.

We students were not the only naïve ones. Within a few years of the Tiananmen massacre, many Western governments lifted their sanctions against China. The West’s engagement policy — based on the hope that trade and investment would bring about democratic changes in China — prevailed.

But instead of instigating liberalization, Western capital fattened the pockets of the Communist Party leaders, giving them the power to prolong their rule by silencing dissent at home and expanding the country’s global clout.

The democracy movement believed that existing leaders would respond positively to demonstrations in favor of change. That didn't work. As it turns out, a "democracy movement" needs to understand that "democracy" does not consist in asking, insistently, that those in power do what the majority would like, or what decency and fairness would require. "Democracy" means "self-government," and those who care about democracy need to understand that it always requires a DIY approach.

No one knows who "Tank Man" was, the solitary student, pictured above, who stood in front of both the reality and the symbol of massive armed power, and who showed, by this action, that opposition to power is always an option, no matter how overwhelming that power may appear. Any democracy movement needs people like "Tank Man," and like Wang Dan himself (shown below), to provide an example that lets the people know that opposition to an intolerable political order is, in fact, possible. 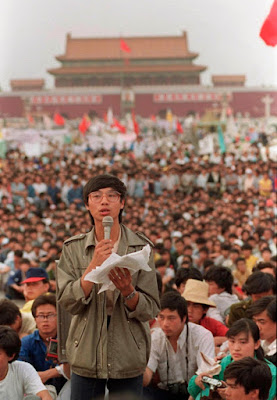 But as Wang Dan's column reveals, this lesson is only the first step to promoting democratic change. All political action begins with a single person, but such political action will be successful only when it leads to the formation of groups that are prepared to take collective action to assume governmental responsibilities themselves. Relying on those who already have power is almost always unavailing, as Wang Dan discovered. The very definition of a "revolution," as described by Hannah Arendt in her excellent book, On Revolution, is that ordinary men and women no longer rely on those who currently wield power, but simply assume, directly, governmental powers themselves.

What have we "learned since Tiananmen?" We have learned that when we hope that changes will come from "within the system," we will usually be hoping in vain. We need to take power ourselves, not hope that someone else will, at long last, treat us as we ought to be treated.

That is not a lesson specific to China!