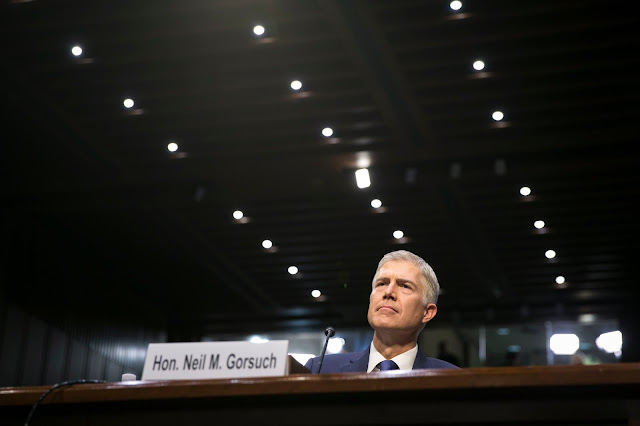 Should the United States Supreme Court consult the law of other nations as it considers the cases that come before it? It seems that Supreme Court Justice Neil Gorsuch is of two minds:

WASHINGTON — Two years ago, at his confirmation hearings, Justice Neil M. Gorsuch said that what happens abroad should not influence American judges in constitutional cases. 'We have our own tradition and our own history,” he said, “and I do not know why we would look to the experience of other countries rather than to our own.”

But last week, during arguments over whether the Trump administration may add a question on citizenship to the 2020 census, Justice Gorsuch did not hesitate to consider what he called “the evidence of practice around the world.”

“Virtually every English-speaking country and a great many others besides ask this question in their censuses,” he said.


Many suspect that our Supreme Court is not just "calling balls and strikes," as Chief Justice John Roberts put it at his own confirmation hearings, some years ago. The suspicion is that the Court's decisions are crafted not to discover what the law "is," but to make the law reflect the political preferences of a majority of the Court. That is not, actually, the way it is supposed to be.

The article I have quoted above, from the April 29, 2019, edition of The New York Times, is well worth reading, as we think about how our Supreme Court Justices are conducting themselves. I have another observation, too.

The United States does not think "citizenship" is of critical importance with respect to how people are treated by the government. The Declaration of Independence says that all people are entitled to life, liberty, and the pursuit of happiness. Not just citizens.

In other words, considering the foundations upon which our governmetn is based, one might well question the relevance of a "citizenship" question in our official census questionnaire. Are you a citizen? The way the Constitution sees it, that's really not very important!