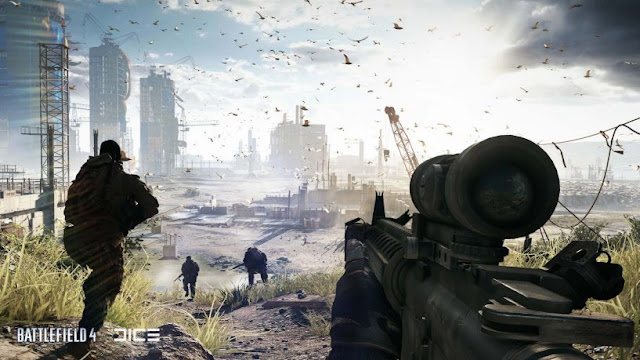 The picture above is from the website that advertises and supports "Battlefield 4," a popular video game. The "Battlefield" video games, as Wikipedia says, are "a series of first-person shooter video games ... developed by Swedish company EA DICE and ... published by American company Electronic Arts."

I am not a "Battlefield" player, but I note that many, if not most, of the scenes depicted show military action within cities. This emphasis on city-based military combat seems to sanction the idea that cities are where military action is most appropriate. I am arguing the opposite.

"War," according to Google's built-in dictionary, is defined as "armed combat between nations." To my mind, war is countraindicated, in general, as a way to solve problems, and as a way to advance human civilization and/or to achieve righteousness and justice. However, IF war is to be continued, as a fundamental human activity, I suggest we return to the original idea that battles should take place on "battlefields." In other words, it used to be that armed conflicts took place in uninhabited spaces that afforded room for the contesting armies to kill and be killed without directly endangering others. Not a bad way to go, if war is what we want!

If we do continue to insist on that "kill and be killed" formula, let's do that kind of thing outside the boundaries of our occupied urban environments, where we have made centuries worth of investment that we need to protect and preserve, and where ordinary people live. Let those who agree to kill or be killed do their killing and dying in places where the rest of us won't have to become unwilling participants and/or victims. Increasing the number of worldwide homeless persons is not a prescription for world peace!

After all the killing is done, those battlefield locations can end up being rather beautiful, too. Check out the pictures below. Not quite the kind of scenes we left behind in Dresden and Nagasaki!