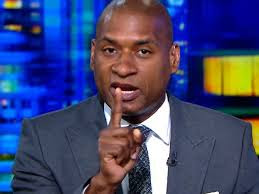 Charles Blow, pictured above, writes opinion columns for The New York Times. He made a very good point in his column on April 8th, identifying President Trump as a "folk hero." As Blow explained it:

The rules don’t apply to the folk hero. People don’t measure them by the same tape. Behavior that people would never condone in their personal lives, they relish in the folk hero.

I believe that the great miscalculation people make in trying to understand Donald Trump and the cultlike devotion of the people who follow him is that they continue to apply the standard rules of analysis. I believe that ... Trump [has] ascended to folk hero status among the people who like him, and so his lying, corruption, sexism and grift not only do no damage, they add to his legend.

The folk hero, whether real or imaginary, often fights the establishment, often in devious, destructive and even deadly ways, and those outside that establishment cheer as the folk hero brings the beast to its knees.


If Blow is right (and I think he is), "proving" how bad President Trump really is is not the way to beat him.

And beat him we must!