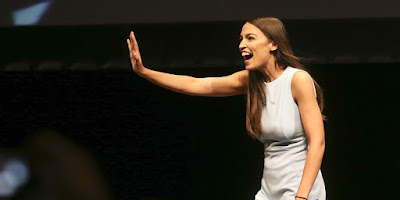 Alexandria Ocasio-Cortez, pictured, was recently elected to Congress, and she has got the old boys network running scared. In a recent news article, the Dallas Bureau Chief for the Bloomberg news service trumpets a statement by Ocasio-Cortez that capitalism is "irredeemable." The headline on the article is as follows: "Ocasio-Cortez Blasts Capitalism as an ‘Irredeemable’ System." Her actual statement is as follows:

Capitalism is an ideology of capital –- the most important thing is the concentration of capital and to seek and maximize profit. And that comes at any cost to people and to the environment, so to me capitalism is irredeemable.


Ocasio-Cortez then goes on to say, according to the Bloomberg article, that she does not think all aspects of capitalism should be abandoned. The headline, in other words, is probably not a completely fair or accurate representation of what Ocasio-Cortez either thinks, or has said about issues related to capitalism.

I am also tempted to remind us all of the old joke, used when something that is supposed to be "outrageous" has been presented to us for its shock value. One very effective response (and I treasure the few times I have been able to do this), is to say, to whomever has tried to scare you with the horror of whatever outrage offends them: "Wow. You say that like you think it's a bad thing."

Trying to discuss politics in terms of "systems," instead of specifics, can often lead us into fights on unfavorable terrain. I am betting that a lot of ordinary voters are not prepared to be against "capitalism." They've been told for their entire lives that capitalism is what has made this country "great."

But there are a lot of "not so great" things about our current economy and society that Ocasio-Cortez properly says need to be changed. And I think that there is a strong majority that wants to make those kind of changes. So, let's talk about the "specifics" and not the "system."

One way to look at it, in fact, is that we can only find out whether or not the current system is "irredeemable" by trying to redeem it - by trying to make those incremental, step by step, changes that people like Ocasio-Cortez, and Bernie Sanders, and Elizabeth Warren are advocating.

Let's focus on the specifics, not on the "system," and let's get to work.

There is an awful lot of very specific work to do!