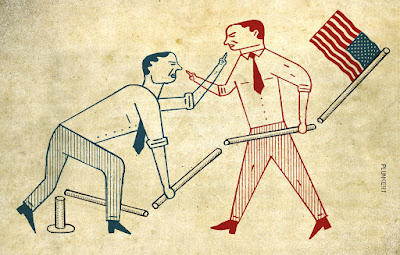 Jason Zengerle has reviewed a recent book by Michael Tomasky. Tomasky's book is called, If We Can Keep It. The title references a statement allegedly made by Ben Franklin, when Franklin was asked what the Constitutional Convention had produced. "A Republic, if you can keep it," is what Franklin is supposed to have replied.

I liked Zengerle's review, and I think it is worth reading. Just click the link if you would like to do that. What struck me most about Zengerle's review, however, was not the discussion about political polarization. I was an elected official in my local community for twenty years. I know how that "polarization" process works. While it can be uncomfortable, sometimes, I am not, actually, too worrried about political polarization. A healthy politics is precisely a politics in which there is an "argument" going on, with the idea being that after the discussion and debate, the public makes a decision, and charts its public policy course. You need the debate to be "polarizing" if politics is going to do its proper job.

What attracted me to the review was a couple of sentences at the end of a paragraph, not central to the argument about political polarization, but central, I think, to our real political dilemma:

Where Americans had once cherished “thrift, discipline, doing without,” Tomasky writes, “in the late 1970s and early 1980s, Americans started to become a different people than they had been.” He adds: “Our consumer selves have overwhelmed our citizen selves.”

In his famous address at Gettysburg, Lincoln said that it was the mission of our nation to be sure that a "government of the people, by the people [and] for the people shall not perish from the earth."

It is desirable, of course, that our government be "for" the people, but to the degree that we are looking to someone besides ourselves (to the "government," in other words) to respond to our needs, and to achieve our deepest hopes, we are positioning ourselves as "consumers" of what "the government" gives us. We must, instead, realize that it is we, ourselves, who have the power to create and destroy. We are not "consumers" of governmental good works. Rather, as "citizens," we are the government. We must never forget that if we truly want our government to be "for" the people, it must first be "of" and "by" them.

Forget about "polarization" as our primary problem. Start focusing in on political participation.