#48 / Returning to Royalty (The Elected Kind) 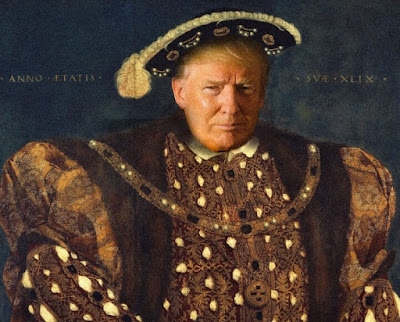 The picture is from Dick and Sharon's LA Progressive, found atop an article titled, "Dear Mr. President: The Royal We." The article, as you might suspect, focuses on the president's recent declaration of a national emergency, related to the president's desire to build a wall along the border between the United States and Mexico.

The point made by the article is that the language used by the president, in justifying his declaration, is "personal." The president's statement that "I am unhappy..." betrays what is really going on. The individual distress of a president is not, in a democracy, a national emergency, however much it may be a personal or political one. The tendency of our current president is to see himself in a "royal" frame, and this goes back to the 2016 campaign, when he sometimes commented on earlier presidencies by talking about the "reign" of this president or that.

At any rate, it's a striking picture. At least that's what I think. I also think that we might, justifiably, start worrying about an "emergency," but that our focus ought to be on whether or not our institutions of government are prepared to reject the idea that governmental powers are subservient to the personal predilections of the president. That is not the way the Constitution says it works.

An article in The Atlantic, published in 2017, raised concerns about whether or not our current president would "destroy the presidency" by failing to follow what are the unwritten, but real, rules governing presidential conduct. An article published by the Brookings Institution, on Valentines Day this year, takes the Atlantic's general concern and makes it specific to the recent presidential declaration.

Congress is not an inspiring body, mostly, but it is composed of persons elected by the voters, and is thus, theoretically, representing the "national" will, not an individual or "personal" agenda. The President's job, as outlined in Article II of the Constitution, is to "take care that the laws be faithfully executed." The President, in other words, is supposed to "execute" the policy decisions made by our representative Congress, not decide what the nation should do based on the president's personal priorities. However, we do need, as a nation, to allow our president to act for us in emergency situations, and that brings us to the precipice upon which we now find ourselves.

The article referenced above, published by the Brookings Institution, notes that what is a national emergency is in the "eye of the beholder." In fact, our designated national "beholder" is the president, and the Supreme Court almost always defers to presidential decisions on issues of national security.

As one for instance, in a decision only recently repudiated by our current Supreme Court, the Court held, during World War II, that President Roosevelt's feeling that persons of Japanese ancestry were potentially traitorous allowed the president, by issuing an Executive Order, to imprison tens of thousands of such persons, with no proof, whatsoever, that any of the people so imprisoned, and who lost their property and livelihoods as a result of this imprisonment, had ever done anything to justify this confinement.

In Trump v. Hawaii, decided last year, the Supreme Court upheld the "travel ban" that accomplished one of President Trump's campaign promises, to "ban Muslims." Using its normal analysis, the Court deferred to the president on an issue of national security. Now, a new Executive Order has been issued, also carrying out a Trump campaign promise to "build that wall." National security is advanced as the reason for the action (an action that was explicitly considered by the Congress and rejected by the Congress). As the Supreme Court considers this matter, as it ultimately will, the Court will be deciding upon the future of American democracy.

The "normal" thing for the Supreme Court to do is to uphold the president's decision on what is, and what is not, an emergency. That is exactly what the Court did in Trump v. Hawaii, and while the Court explicitly repudiated the Korematsu decision (never before repudiated), it did so by stating that Korematsu was completely unlike the "Muslim ban" case, which was not based on race but on an "entry suspension that is well within executive authority..." Here is an excerpt from Chief Justice John Roberts' decision in the "Muslim ban" case:

Finally, the dissent invokes Korematsu v. United States, 323 U. S. 214 (1944). Whatever rhetorical advantage the dissent may see in doing so, Korematsu has nothing to do with this case. The forcible relocation of U. S. citizens to concentration camps, solely and explicitly on the basis of race, is objectively unlawful and outside the scope of Presidential authority. But it is wholly inapt to liken that morally repugnant order to a facially neutral policy denying certain foreign nationals the privilege of admission. See post, at 26–28. The entry suspension is an act that is well within executive authority and could have been taken by any other President—the only question is evaluating the actions of this particular President in promulgating an otherwise valid Proclamation.

The dissent’s reference to Korematsu, however, affords this Court the opportunity to make express what is already obvious: Korematsu was gravely wrong the day it was decided, has been overruled in the court of history, and—to be clear—“has no place in law under the Constitution.” 323 U. S., at 248 (Jackson, J., dissenting) [Emphasis added].

The American Revolution was fought to create a democratic political order, and to reject the monarchial form of government that then prevailed. Reading The Declaration of Independence makes that clear.

Monarchial rule can take root with an elected monarch, too. Unless the Supreme Court does what would really be something different from what it usually does, deference to this president will return us to those pre-revolutionary times!