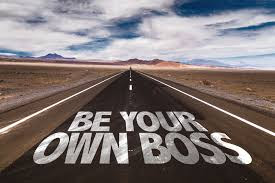 The Nation magazine, reporting on a new book by Sarah Churchwell, explores what the so-called "American Dream" is all about.

The Wall Street Journal, in a column by Jason Willick, addresses the "politics of work."

Both publications (almost polar opposites in their politics) seem to agree that decent and meaningful "work," and not just "money," is what Americans want. That's what those (American) dreams are made of.

One solution, of course, is to "be your own boss." This is increasingly the only option for many of us, as even major corporations are more and more intersted in hiring contract workers, and less and less interested in providing the type of long-term positions, within a stable business, and with health and other benefits, that were the rule, and not the exception, when I was young. I have made fun, before, of the so-called "gig economy," pointing out that one definition of the word "gig" is a "pronged spear for catching fish." "Gigged," indeed, are the many caught within the "gig economy."

A model not much noted, but with which our nation has actually had some positive experience, is based on the idea that we can be our own boss, but "collectively," not "individualistically." I am referring, of course, to the Works Progress Administration (WPA), deployed as an antidote to the Great Depression during the administration of Franklin Delano Roosevelt. Millions of people were employed, in decent and meaningful work. In my view, reviving this model would be one good way to achieve not only economic security, but to achieve "social security," too, in the very broadest sense of that term.

That would require, I must admit, that the wealth of the nation, created by our collective efforts, would have to be deployed to benefit 100% of the people, not just 1%! That is my "American Dream" solution. It's a collective approach, not an individualistic one. It kind of goes along with that suggestion from one of those early Bob Dylan songs: “I’ll let you be in my dream if I can be in yours.”

Maybe some presidential candidate, or maybe even two, will talk about that next year.