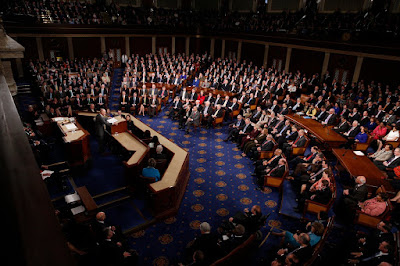 There’s one question ... I’d like to ask of practically every member of Congress. Why are you so dispossessed?

You take all the trouble to run for public office and, against all odds, you actually get in a position to wield influence. But then you accede to a thousand small decisions that you and your predecessors have made, and you give it all away.

There are 535 Americans elected to Congress, but the way things are arranged now only three have real power — Nancy Pelosi, Mitch McConnell and Chuck Schumer. Only a handful of others — in leadership — have a whiff of power. The rest of you have rendered yourselves less powerful, in a way never envisioned by the founders.

You Senate Republicans are in a double bind because what power you didn’t give to the majority leader you gave to Trump.

Now, that is a good question, David! On January 31, 2018, I pretty much asked the same question, though I posed the question to each one of us, individually, in our capacities as citizens of a democratic country, and thus persons in whose hands governmental power is supposed ultimately to reside.

I had an answer to my question, as well, and it may be that this same answer would provide a correct explanation for what puzzles Brooks. He wants to know why Members of Congress aren't really trying to deal with the nation's problems, even though they are, of course, officially designated as the persons who are supposed to represent the citizens who elected them, and who are thus supposed to serve as the mechanism by which we, the citizens, achieve self-government.

I tend to think that one reason we do not assert our democratic control over our government more than we do is because we would prefer not to be implicated in any admission that we are in charge of what the government is actually doing.


My son recently discovered one of my favorite Bob Dylan songs, "Changing Of The Guards." My favorite line from that song goes like this:

Eden is burning, either brace yourself for elimination

It does require courage to assume responsibility for the way things are - and then to assume responsibility for trying to change things, when things are unacceptable. Dylan's lyrics are a poetic way to convey just this point. If "Eden is burning," then we need to have the courage to try to change the unacceptable realities we confront. We will need courage to insist upon a "changing of the guards."

Politically, courage must always come from the "bottom up" (that means us, folks). Eden is burning, and if we lack courage now, then Dylan tells us exactly what to expect.