#2 / The Immanence Of The Divine 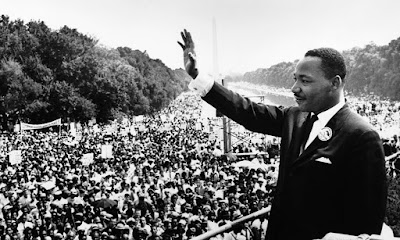 As it has turned out, my post yesterday is not going to be my last post of 2019 touching on religion. I did speculate to that effect, yesterday, but immediately after writing that January 1, 2019, post, I came across an article in Aeon, titled, "Why divine immanence mattered for the Civil Rights struggle."

The idea of "divine immanence" is that God is found within each human person. This is definitely a "Quakerly" idea; in fact, it may be THE idea upon which all Quaker Faith and Practice is based. The idea that God is immediately accessible to each one of us is also empowering in exactly the same way that an understanding of the immediate availablity of "grace" is empowering.

Here's an excerpt from that Aeon article, written by Vaneesa Cook, Professor of US History, University of Wisconsin-Whitewater. I am hoping that this little excerpt will be inspiring and empowering, and will reinforce in our minds what I think is a truth too plain to deny: We (and none others but ourselves) are called upon to transform this world in which we live, and to do it promptly, too, lest that world cease to exist:

The concept of divine immanence became less theoretical once King learned about the activism of Mahatma Gandhi. Though Gandhi was not a Christian, his method of satyagraha, meaning ‘truth-force’ or, as King put it, ‘soul force’, fascinated King. Gandhi challenged the British empire by forcing them to confront their Indian subjects as fellow humans, deserving fair treatment. He did so without firing a shot. From Gandhi’s example, King saw how humans practising God’s love, particularly through nonviolence and disciplined self-comportment, could unleash the power of God’s love in the world. He acknowledged Gandhi’s method as ‘the guiding light of our technique of nonviolent social change’ during the Montgomery bus boycott. In Selma, Alabama and in Memphis, Tennessee, and throughout the US South, King continued to utilise Gandhian strategies of direct action throughout his campaign against American racism. For King, in short, divine immanence was a call to action. ‘All humanity is involved in a single process,’ he contended, working in concert with God’s Holy Spirit, the ultimate ‘community creating reality that moves through history.’ God and mankind, in other words, moved together. From the perspective of theological doctrine, King had reconciled immanence and transcendence.

King was all too aware that forces of opposition to God’s will filled the world too. He saw the fruits of his efforts in incremental reforms, but small results could be discouraging. Here is where King’s faith in an immanent God stepped in. The night before his assassination, while addressing a group of sanitation workers on strike in Memphis, King spoke of God. Though he warned of ‘difficult days ahead’, he claimed that God had allowed him ‘to go up to the mountain’ and see the ‘Promised Land’. ‘I may not get there with you. But I want you to know tonight, that we, as a people, will get to the Promised Land … Mine eyes have seen the glory of the coming of the Lord!’

King’s courage rested upon that conviction. God’s truth would march on as an intrinsic force in the world through his allies. It would help the faithful build the brotherhood of man. A transcendent God could not do it alone, a certainty for King that made him willing to do the work. But King could not do it alone either. He called upon both black and white activists, the entire nation and the worldwide community to join him in the cause, which he knew would continue beyond his lifetime. On the eve of his death, he told the crowd he was not worried. In the end, he believed, immanence would overcome everything.