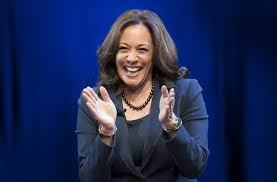 Kamala Harris, formerly the Attorney General for the State of California, who now represents California in the United States Senate, is getting ready to announce her bid for the presidency. If you would like to see how that's going, let me refer you to an article in the Sunday, January 13, 2019 edition of The New York Times.

In the hard-copy version of The Times, the article was titled, "California Senator Tries Out Themes to Help Her Stand Out in a Crowd." In the online rendition, which is what you will get if you click the link above, the article is titled, "Kamala Harris Is Hard to Define Politically. Maybe That’s the Point."

Trying to be on all sides of all the issues, and to appeal to everybody, is not the best way for a politician to get my vote. I regard politics as the process by which we make collective decisions on important matters, matters upon which we need to "choose." If candidates don't tell you "which side they are on," it is exceedingly hard to make meaningful choices. Politics becomes an exercise in advertising and personality. The predominance of this kind of politics, I believe, is one reason that a huge number of potential voters don't vote, and it is the reason why "politics" is not highly-regarded as a profession, at least by many.

In the [Harris] memoir [The Truths We Hold], which was released simultaneously with a children’s book by Ms. Harris called “Superheroes Are Everywhere,” she repeatedly writes that she does not believe in “false choices.” This can mean both meaningful workers’ rights and a strong economy, she writes at one point, but she also applies the concept to police accountability and public safety.

“I know how hard it is for the officers’ families, who have to wonder if the person they love will be coming home at the end of each shift,” Ms. Harris writes. “I also know this: It is a false choice to suggest you must either be for the police or for police accountability. I am for both. Most people I know are for both. Let’s speak some truth about that, too.”

I think Harris is right in what she says, but the question for her campaign, presuming she does launch a presidential bid, will have to be "what side is she on?" with respect to the real choices we need to make. We can have workers' rights and a strong economy both, and in fact, I'd argue, you can't have one without the other. But the massive income inequality that is the dominant feature of our current economy must be eliminated. We are going to have to make some "real" choices there. We can support both the police and police accountability, too, but when a police officer guns down an unarmed person of color, will our system punish and penalize that police officer? So far, the system isn't working that way.

Politicians often base their appeal to the voters on "false choices." Our president is a master of this technique, positing, for instance, that we need to choose between national security and his "wall." Another way of misleading the voters is to suggest that we don't, actually, have to make any hard choices at all, and that we can "have it both ways." We can't!

There are real choices out there, and we need politicians unafraid to confront them, and to say which side they're on. Personally, I am looking forward to hearing from another soon-to-declare presidential candidate, Tulsi Gabbard, who says we need to scale back American military intervention around the world. We can't have it both ways on that. There is a real choice between a more peaceful world, and the continuing exercise of massive military intervention by the United States, everywhere around the globe. I'll be interested in hearing what Kamala Harris has to say about that.