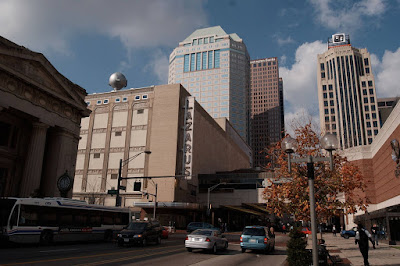 I questioned myself on why the story below, which I saw in a hard copy edition of The Wall Street Journal on December 18, 2018, seemed so heartwarming to me. Maybe my reaction was just an "old guy" phenomenon, based on nostalgia for a past long gone. After all, I did just turn seventy-five.

Having made that "old guy" admission, I would like to think that the story might have some heartwarming appeal even to those who did not grow up in the 1940s and 1950s, and that the story will resonate with others, too. That is why I am passing it along in its entirety, here in this blog posting.

In the end, I concluded that what made this story so attractive to me was the mutual respect demonstrated by both the rich store owner and the poor customer. That kind of mutual respect, it seems to me, reflects a "right relationship"  in a democratic republic. I am hoping that the kind of relationship depicted is not, in the end, simply an historical artifact!

When Retailing Was Very Personal


A department-store proprietor picked up his home phone. A customer needed help.

Long before internet shopping, when a personal touch and pride of proprietorship were essential to successful local merchandising, Robert Lazarus Sr. was the president of the largest department store in Columbus, Ohio, my hometown. His name was on the building: the F&R Lazarus Co., among the most prestigious stores in the Midwest.

A dignified, respected man, he lived in a grand and tastefully decorated house. He kept his home number listed in the phone book.

Here is something his son told me, years after Robert Lazarus had died, and the store had disappeared.

One evening when the son was growing up, the telephone in their home rang. The caller, with nervousness in his voice, asked for Robert Lazarus, who came to the phone.

The man, almost apologetically, said he and his wife had purchased a tea set at Lazarus. They had never owned one before, but saw it on display and decided it was something they would like to have in their home.

Robert Lazarus waited to hear what was coming next. Was there a flaw? Was a cup or saucer broken?

That wasn’t it. The man said he and his wife did not know the proper way to serve tea—how to make use of the tea set when company came over. They sensed there was an etiquette to it, but no one had ever told them what it was.

Some of Lazarus’s customers had very modest incomes; to them, that downtown store was almost a palace, a place of aspiration, even if they were only looking. The tea set had represented a step up, a significant expenditure for this man and his wife. And they weren’t quite sure how it was intended to be used.

So the husband called the man whose name was on the store—at home, at night—for advice.

Robert Lazarus, his son said, stayed on the phone with his customer and, with great care, walked him through the steps of having a tea party, of using an elegant tea set. He told the man stories about tea receptions he and his own wife had given; he answered every question.

Then, before hanging up, he thanked the man profusely for having shopped at Lazarus.

I asked the son—by then an elderly man himself—if his dad had seemed at all bothered to have received the call in the middle of an evening with his family.

“Bothered?” the son said. “He couldn’t have been more pleased. He talked about it with great fondness for the rest of the night.”

I imagine the man who had placed the call did, too: The man who, in a time before customer service meant algorithm-generated email responses and endless waits for offshore call centers to answer, had taken a deep breath and dialed the phone, not knowing if he was making a mistake by imposing.

And who had been greeted, by the president of the F&R Lazarus Co., like an old friend.