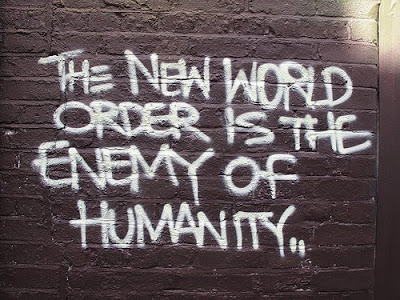 The unexpected resignation of Secretary of Defense Jim Mattis has led to speculation that the United States is now abandonning its quest for that "New World Order" announced with such satisfaction by President George H.W. Bush (recently departed).

Click the link for a video of President Bush's speech to Congress, in which President Bush said that this "New World Order" was one in which "peace, and security, freedom, and the rule of law" would prevail. After listening to this speech, you might want to glance at a newspaper, or watch a little television, to see how that's going!

As can be seen from the picture above, not all agreed with this "New World Order" idea, which some have seen as a simple effort to establish a hegemony of United States power, worldwide. Others, coming from an exactly opposite position, see the "New World Order" as a conspiracy that will result in the surrender by the United States to an international cabal that will establish an authoritarian dictatorship, on a global basis. I am not sure which group painted the sign!

Caitlin Johnstone, a political blogger from a left-wing perspective, who calls herself a "Rogue Journalist," is not bemoaning the loss of the "New World Order." Johnstone pretty much sees U.S. history since the first Bush's announcement as reflecting an effort by the United States government to establish a worldwide authoritan regime, but one led by the corporate masters who control the United States, and whose principle policy is "endless war." If you have taken a glance at a newspaper and watched a little television, as suggested, you might conclude that she is on to something!

NBC News, which illustrates its commentary with the picture at the bottom of this blog posting, suggests that our current president has taken us from a "New World Order" to "No World Order." That, in fact, seems to be getting at an important truth. Things are changing, and in such a time of change, it is worthwhile to ask ourselves this question: Do we really want a global "order" imposed on a worldwide basis by the use of "endless war? I, for one, do not, and what I would like to suggest is that the changes now underway might (just might) open up an opportunity for a new way of living together in the world. Such a new "order," to use that word, though not in the sense that one nation would be issuing the "orders" that others must follow, would not be based on the exercise of American military power (or Chinese military power, or any other nation's military power, for that matter).

All peoples of the world are facing a true global crisis, global warming, which cannot be successfully overcome by military means. We do need to "reorder" our priorities, individually, nationally, and globally. Endless war is counterproductive.

It is in moments of "disorder" (and we're there, I think) that new possibilities emerge. If we begin to realize such new possibilities, which we must, of course, do, then that will be the "silver lining" that accompanies the incredibly "disorderly" conduct of our current president.

The "new possibilities" I am thinking about, by the way, do not include cottoning up to a ruthless dictator controlling an oil-rich nation: 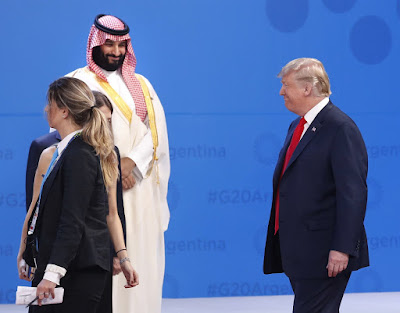