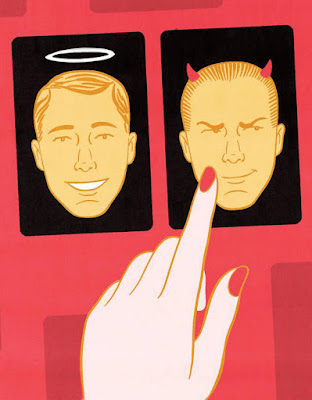 The Wall Street Journal ran a column recently that opined that "one fundamental reason people are altruistic is to make themselves attractive to sexual partners." The article is a fun read, and it may not be, ultimately, only about how to attract a mate.

According to Dr. Glenn Geher, a professor of psychology and the founding director of the Evolutionary Studies Program at the State University of New York at New Paltz, a cross-cultural study of qualities found attractive in mates, carried out in 1990 by David Buss and colleagues, found that "kindness placed toward the top of the list" across a broad range of cultures.

Mate preferences are a very strong evolutionary force, so if people prefer kindness in mates, kindness will become a common attribute in the species. This is one reason why there are so many good people.

Terrific! This sounds rather hopeful. The nice guys get the girls! But then why are there so many "bad" people? There are lots of people (let's remember our president) who evidence what Geher calls "the dark triad." This dark triad of personality traits consists of "narcissism (an excessive focus on oneself), Machiavellianism (manipulating others for one’s own gain), and psychopathy (an overall disregard for others)." Those "dark triad" types aren't full of loving kindness. They get the girls by "grabbing them by the p**ssy."

Geher moves from what amounts to an explanation of how our president operates (without ever making the connection explicit) to an evaluation of the reproductive strategies of wood frogs. He ends up coming down on both sides of the "how to score with a woman" question:

To understand how some people flourish in life by being nice while others succeed by being jerks, evolutionary psychology turns to the concept of "strategic pluralism." This is the idea that members of the same species might evolve different and even contradictory strategies for survival, depending on the conditions they face.

This Wall Street Journal article wouldn't have been written, I bet, if our president were still Barack Obama. Obama is clearly on the "nice guy" side of Geher's discussion about successful reproductive strategies. But this discussion of the strategies of reproductive success, at least I think, is actually intended to make us wonder about the strategy of political success that gave us these two, sequential, presidents, with "Mr. Nice Guy" giving up his place to that dark triad "jerk."

Evolution is a phenomenon that appears to operate beyond the realm of individual human choice. Politics is not. Whatever evolution may produce, over the long run, politics operates on a short run basis, and I think the lesson of this fun article is clear: next time, let's not choose a "jerk" for president!

If you choose the jerk, after all, you know you'll get screwed!