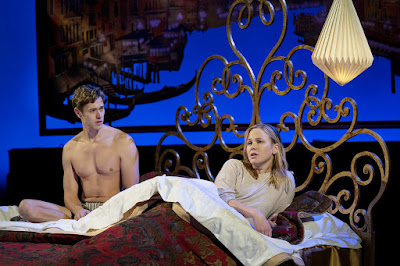 If you happen to be heading to New York City, and want to indulge in some theatre, it appears that Tom Stoppard's play, The Hard Problem, will be playing at the Lincoln Center through January 6th.

The play got a good review in The Wall Street Journal, and The New Yorker has writtten it up, too, in a rather positive way.

The "hard problem" that Stoppard is talking about is the "conundrum of human consciousness," as The Wall Street Journal puts it. Another way of formulating the question is to ask whether "we," who appear to ourselves, at least, to exist, actually have any "independent" or "individual" existence at all. Is there an "I" that is anything above, beyond, or different from the human flesh in which we find ourselves incarnated?

Or, is that even true? That incarnation thing? Maybe there isn't any "I" that is anything other than the flesh, blood, brain, and bone that we do know is associated with who we think (or at least sometimes think) we "are."

It's a hard problem, indeed, and it may just be a kind of foolish pride, but it's not easy to write off what we experience as our "self." I am not sure that Stoppard (or anyone else) has solved this puzzle. Based on the reviews, it appears (quoting The Wall Street Journal, again) that Stoppard is at least "asking the right question."

I think I've mentioned Iris DeMent in some earlier blog posts, and I'm casting my vote with Iris. She knows all about this "hard problem," but she's not going to try to solve it. You can listen to her approach, by clicking the link, below, and activating a video with some very nice music. Iris says, not without an appreciation for Tom Stoppard's efforts, I feel certain, that we had better stop fretting about that "hard problem," and just "let the mystery be."