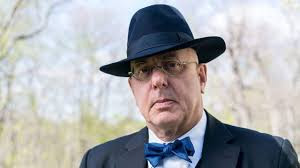 Teaching is like sex: technology can improve it at the margins.

On November 10, 2018, the day I published a blog posting with the title, "Analog," I happened to reread an essay by Leon Botstein (pictured above). Botstein is the president of Bard College, and his essay, "Democracy and Public Space," is a written transcription of the remarks he gave at the opening of the Hannah Arendt Center's 2017 conference, "Crises of Democracy."

Botstein is a pretty amazing person. You can see a short summary of his accomplishments, produced by Wikipedia, at the bottom of the page. For the moment, I would like to focus on Botstein's commentary on teaching and sex. In the essay, Botstein made clear that the analogy applies not only to teaching, but also to politics.

I trust most would join with me in acknowledging that sex must be, for the most part, an "analog" activity. That is, to be fully satisfying, it must be carried out within a real, physical space. Technology can provide some augmentations, perhaps, but only "at the margins."

I agree with Botstein that the very same observation can (and must) be made about both teaching and politics. Real contact, with real people, in a real, physical space, is an absolute requirement.

We are not going to change our politics online!

Botstein is the music director and principal conductor of the American Symphony Orchestra (ASO) and conductor laureate of the Jerusalem Symphony Orchestra (JSO), where he served as music director and principal conductor from 2003-2010. He is also the founder and co-Artistic Director of the Bard Music Festival. He is a member of the Board of Directors of The After-School Corporation, a nonprofit organization dedicated to expanding educational opportunities for all students. Botstein also serves as the Board Chairman of the Central European University, a graduate-level, English-language university accredited in the United States and Hungary and located in Budapest. He is a member of the Board of Trustees of the Open Society Foundation. In July 2016, Austria's Grafenegg Festival, a major international Austrian festival for classical music, appointed Botstein artistic director of the Grafenegg Campus and Academy, effective in 2018.

Botstein is the author of Jefferson's Children: Education and the Promise of American Culture and Judentum und Modernitaet. He graduated at age 16 from the High School of Music and Art in New York City, and earned a bachelor's degree from the University of Chicago and a Ph.D. from Harvard University in music history. He credits David Landes and Harold Farberman as his mentors.

Botstein became the youngest (or possibly second youngest) college president in U.S. history at age 23, serving from 1970 to 1975 at the now-defunct Franconia College, after which he was named president of Bard College [at age 27].