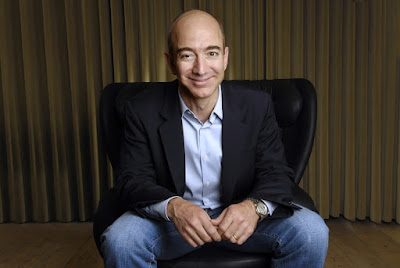 The FiveThirtyEight newsletter arrives in my email inbox on a daily basis. On Wednesday, November 14, 2018, the newsletter reported as follows (this report, of course, is no longer actually "news" to those reading this blog post on November 29th):

$2 billion in tax incentives
Amazon has announced New York and Virginia as its chosen sites for its second headquarters, or “HQ2” — never mind the mangled fact that these are not close to one another and at the very least it’s HQ2 and HQ3, or something similarly stupid. More pertinent is the fact that New York, yours truly apparently included, is paying Amazon $1.2 billion in tax incentives. We — meaning New York — have also apparently agreed to secure Jeff Bezos “access to a helipad.” Jeff, listen, because I’m paying for your gaudy lifestyle: You take the broken-ass subway for a month, and I’ll take the helicopter. After that, I’ll take you out for a beer at a good New York place, on me, we’ll exchange notes on commutes, and go from there. Deal? [The New York Times]

Jonathan Tashini, author of The Working Life podcast, made a comment about this same topic on the very same day. Tashini's podcast was distributed under the headline, "Amazon Bigfoots NY and VA." Tashini called Bezos "Robber Baron of the week."

Let me suggest that it might have been more accurate to say Robber Baron of the YEAR, or maybe the decade, or maybe even the Century (though this Century is, admittedly, just getting started and there is a lot of Robber Baron potential still to come).

Robert McNamara is an historian now writing for the ThoughtCo website, which identifies McNamara as "the first-ever history editor for Amazon.com." McNamara defines "Robber Baron" as outlined below. I wonder whether or not he would agree with Tashini that this definition should be applied to his old boss:

Robber Baron was a term applied to a businessman in the 19th century who engaged in unethical and monopolistic practices, utilized corrupt political influence, faced almost no business regulation, and amassed enormous wealth.

McNamara's definition focuses on the "corrupt political influence" exercised by the Robber Barons. I have no knowledge whether or not Bezos utilized his immense wealth "corruptly" to get the commitments he received to subsidize his business. Maybe he did. My complaint is more along the lines of the objections put forth by Oliver Roeder, who was the actual author of the observstions made by FiveThirtyEight.

Why should our local governments (or our state and national governments, for that matter) be providing massive subsidies for businesses and developers who are proposing changes that will benefit the businesses and the developers but that will almost certainly also reduce the quality of life for those already living in the community, and that will quite often saddle them with new economic burdens, as well?

I do think there is some "corruption" involved in these kind of deals, and sometimes it is the "Robber Baron" type of corruption, where political payoffs are given in exchange for selling out the public interest to those who are paying the bribes. However, even if this bribery-type of corruption is not present, we do need to recognize that our system of self-government has been corrupted at its core if we allow our elected representatives to make secret deals that will profoundly affect our future, without us (the public, the hypothtetically self-governing public) knowing anything about it in advance.

If we allow our elected officials to do this to us (and it is very common that we do), then it is what some might say is "our bad!"