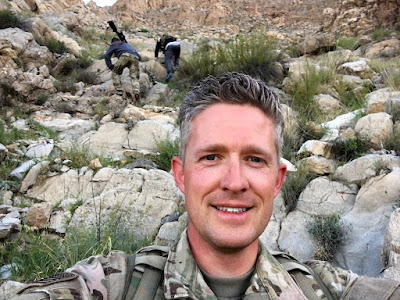 Here is a picture of Major Brent Taylor, also known as "Mayor" Brent Taylor. Taylor was the Mayor of North Ogden, Utah, when he was called up, as part of the National Guard, to deploy to Afghanistan. This was his fourth deployment. Taylor left his wife and seven children behind and took a leave of absence from his job as Mayor. You can read the whole story in The New York Times.

To cut to the bottom line:

He did not make it home. Major Taylor, 39, was killed on Saturday in an insider attack, apparently by one of the people he was there to help.

This story reports on just one more of those "when will they ever learn" moments. The United States of America should not be sending its good citizens/trained killers off to remote countries, allegedly to "help" them. Our military involvement in Afghanistan, and in all those other places around the world where good people get sent to kill for the United States, is not "helping" those other countries.

It is not helping ours, either.