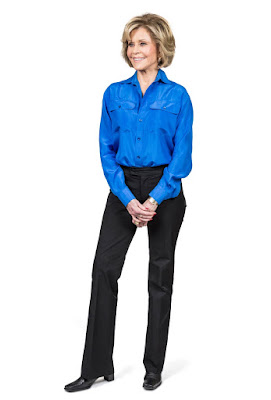 I shared a stage with Jane Fonda once. It was at the Louden Nelson Center, in Santa Cruz, California, and I forget the exact occasion. Jane was visiting Santa Cruz in connection with a campaign of some sort, and I think I introduced her to the audience.

As a draft resister during the Vietnam War, I have always been deeply grateful to both Jane Fonda and Tom Hayden for their efforts to stop that horrific conflict.

In the New York Times article from which I captured the picture to the right, Jane quotes a veteran who said, during a recent gathering in New York City, “If I had a Congressional Medal of Honor, I would present it to you. I am so grateful that you helped end the war.”

The Times article announced a new HBO biopic covering Jane Fonda's life, Jane Fonda in Five Acts. What struck me most in the article was the following exchange:

What’s the focus of your activism today?
Grass-roots organizing. The organizations that are going door to door and helping people understand that the white working class is not the enemy of people of color, and vice versa.

Jane is right on target, once again! My sentiments, precisely!