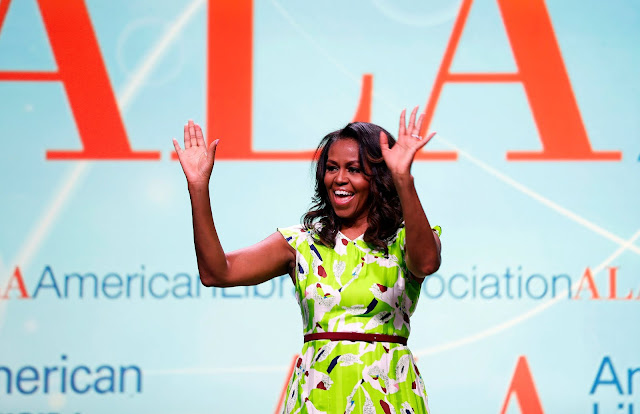 Michelle Obama has written a book. It will soon be available for purchase, and the author is going on one of those promotional book tours that generally accompany the publication of a new book that the publishing house thinks will be a big seller. Michelle Obama's book tour is going to be a bit different from the typical book tour, however:

While other authors typically follow a circuit that may include podcast interviews and stops at the 92nd Street Y in New York and Powell’s Books in Portland, Ore., Mrs. Obama is set to embark on a 10-city tour put together by Live Nation, the world’s largest concert promoter, which manages about 500 artists, including Miley Cyrus, Beyoncé and U2. Tickets are available, while they last, from Ticketmaster.

The last First Lady to do a promotional book tour, Hillary Clinton, spoke in auditoriums which seated about 3,500 persons. Michelle Obama is shooting to sell those pricey tickets in arena venues with seating capacities on the order of 20,000.

In The New York Times' article from which the quotes above were taken, Anand Giridharadas, who has written a critique of modern philanthropy, made the following comment, which caught my attention:

An arena with tiered seating is a powerful metaphor for everything they presumably want to destroy. What this illustrates to me is that cashing in has become our common culture in a way we don’t realize. It’s the water in which we’re all swimming.”

I have a couple of responses to Giridharadas' observations. First, not all of us are swimming in the "cashing in" culture that does seem to infect some former Presidents and some former First Ladies. I think it's too bad, frankly, that the Obamas have also caught the bug. In my opinion, one of the reasons that Hillary and Bill Clinton are not very much liked as persons (and I do contend that this is true, though I may just be reflecting my own feelings) is their very public and very successful effort to "monetize" their past public service, charging something like $250,000 for a single speech.

The conflation of extreme wealth with public office is the opposite of what our democracy needs. Our current president, of course, went from being a real estate and media mogul to the presidency. According to the article, which indicates that the Obamas are starting a new film production company, former president Obama is attempting to reverse the Trump trajectory, going from president to media mogul.

Here's my second response related to Giridharadas' observation that locating the former First Lady's speeches in "arena tiered seating" sends exactly the wrong political message to those whom are being addressed.

I agree with Giridhaaradas. Democracy is not a "spectator sport," and political figures who promote a culture of watching the "stars" perform send exactly the wrong message about what we need to do to save democracy and save our nation.

Want a good model of a former First Lady? Think about Eleanor Roosevelt. After she was no longer First Lady she worked tirelessly for passage of the Universal Declaration of Human Rights - and  she succeeded, too.