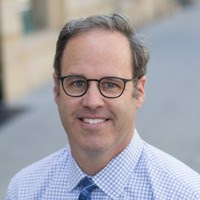 Ryan Coonerty, pictured above, describes himself in his LinkedIn profile as an "Elected Official, Entrepreneur, Academic and Author." In his academic role, Coonerty teaches in the Legal Studies Program at the University of California, Santa Cruz. Recently, using his classroom experiences at UCSC as the basis for some reflections on democracy and freedom of speech, Coonerty authored an engaging Opinion Editorial in the San Francisco Chronicle.

The title of the hard-copy version of Coonerty's column was, "It's not just free speech at stake." Online, the Chronicle titled the column, "Why our college students think like Trump." I am not sure that either of those titles was chosen by Coonerty, and I particularly suspect that the online version was not his choice. While Coonerty does draw some parallels between the way students think and the way our president thinks (to be generous in using the word "think" with respect to the president), Coonerty never actually makes the assertion that college students "think like Trump." Let me just add, parenthetically, I hope not!

Since the Chronicle maintains a paywall for non-subscribers, it may or may not be possible for those reading this blog post to get access to the entire Coonerty article. I would like to hope that the column will be generally available online, since it is well worth reading. It does accurately reflect the kind of student attitudes that I, too, have encountered at UCSC, where I also teach in the Legal Studies Program.

As Coonerty outlines how students typically react to his course on free speech, he says the following:


Conservative students will talk about how they’ve been censored or had to self-censor. Liberal students will respond that while their conservative ideas are fundamentally wrong and dangerous, so too is censorship. It will be an exchange that would make Thomas Jefferson proud.

Then, one student will note that it’s ironic that these adults are so worried about the coddling of Millennial minds, while these same adults have created policies that have left this generation very uncoddled economically: saddled with debt, dim wages and no benefits. The class will rise up in agreement and anger, also citing the environment, endless wars, and half a dozen other catastrophes that they are supposed to solve while deep in debt and while older generations wring every last drop out of the system on their way to retirement and death.

This anger and sense of betrayal has, according to a poll by Pew Charitable Trusts, left this generation significantly less trusting than other generations. After teaching for more than a dozen years, this is the biggest change I’ve seen in my students. There is no institution or governance system that these students trust, including, as a Harvard study found last year, democracy. There is no leader who isn’t a hypocrite. No ideals that can’t be picked apart with counterfactuals. And, it is this dynamic that animates their lack of faith in democracy and free expression.

To a generation formed during financial crisis, influenced by social media and witnessing a failing political system, laws are just instruments to be leveraged or ignored for the purpose of the day. In this way, there are shocking similarities between them and President Trump ...

What makes this generation different is not their lack of support of free speech, it is that they simply don’t believe in law or politics as a means to protect it (emphasis added).

I want to comment on that last statement from Coonerty's column (the one with the emphasis added). I don't think, personally, that it is accurate to say that the current generation of college students "doesn't believe in law or politics as a means to protect free speech." At least, I don't think that such a judgment can properly be put in such absolute terms. I do think it is correct to point to an increasing skepticism about the ability of law or politics to protect free speech, a skepticism that college students do manifest, but a skepticism in which they are by no means alone! There is lots of skepticism, generally, about the ability of law and politics to accomplish anything, including protecting the rights of free speech.

As the title of this blog makes clear, I am of the opinion that "we live in a political world." That is true whether we want to or not, which means that we have no option except to make politics and law work for us, and to accomplish our most cherished hopes and dreams. Law and politics is what we've got, whether things are "going well" or "going to hell."

Let's not fall victim to the "observer's fallacy," which suggests that reality is "what we see." Reality is what we make it, and we use the tools of politics and law to make the world we want. Yesterday's blog posting commented on a New York Times column by Michelle Alexander that ran on the same day that Ryan Coonerty's column ran in the Chronicle. Alexander was also making an "observational" comment, and was trying to tear our eyes away from the accident scene of our current politics to take a longer view. Doing that, taking a longer view, can help offset the feelings of helplessness and despair that college students, and all of us, might feel as we contemplate our current situation.

It is Alexander's contention that we have been, albeit slowly, and albeit with setbacks along the way, building a more inclusive democracy. The longer view makes clear that politics and law do make a difference. My own hope, as I interact with students (and everyone) is to spur them on to continued effort! Politics and law are the tools at hand.