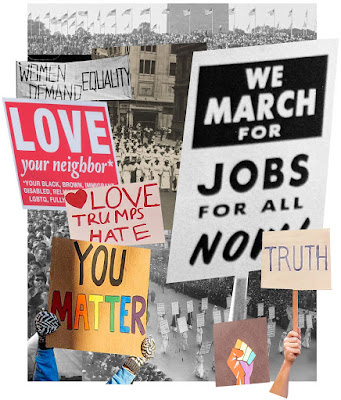 Michelle Alexander, the author of The New Jim Crow, is apparently going to be writing columns for The New York Times. Her "debut column," appearing on Sunday, September 23, 2018, was titled, "We Are Not The Resistance." If you are at all interested in what the politics of our current time may signify or foretell, this would be a good article to read.

Alexander says, and I think correctly, that whatever may appear to be our situation in this exact political moment, we can trace, over the longer term, a freedom struggle that is "like a river, sometimes powerful, tumultuous, and roiling with life; at other times meandering and turgid, covered with the ice and snow of seemingly endless winters, all too often streaked and running with blood."

In saying this, Alexander is quoting Vincent Harding, an African-American historian, scholar, and social activist. The following quote, however, is definitely all-Alexander. It is certainly worth reminding ourselves of this:

The disorienting nature of Trump’s presidency has already managed to obscure what should be an obvious fact: Viewed from the broad sweep of history, Donald Trump is the resistance. We are not.