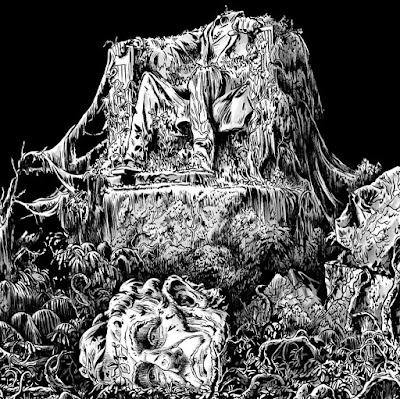 In case you can't quite identify what is going on in the image above, I think it is intended to represent the end of democracy in the United States of America, with the famous statue of Abraham Lincoln covered with creeping vines, and with Lincoln's noble head having been severed from his body.

I am providing a link to the article from which the image is taken. The article is titled, "Democracies end when they are too democratic." The article, by Andrew Sullivan, appeared in the May 1, 2016, edition of New York Magazine.

Writing during the 2016 presidential campaign, Sullivan is reporting on what Plato might said about the state of our politics:

As this dystopian election campaign has unfolded, my mind keeps being tugged by a passage in Plato’s Republic. It has unsettled — even surprised — me from the moment I first read it in graduate school. The passage is from the part of the dialogue where Socrates and his friends are talking about the nature of different political systems, how they change over time, and how one can slowly evolve into another. And Socrates seemed pretty clear on one sobering point: that “tyranny is probably established out of no other regime than democracy.”

What did Plato mean by that? Democracy, for him, I discovered, was a political system of maximal freedom and equality, where every lifestyle is allowed and public offices are filled by a lottery. And the longer a democracy lasted, Plato argued, the more democratic it would become. Its freedoms would multiply; its equality spread. Deference to any sort of authority would wither; tolerance of any kind of inequality would come under intense threat; and multiculturalism and sexual freedom would create a city or a country like “a many-colored cloak decorated in all hues.”

This rainbow-flag polity, Plato argues, is, for many people, the fairest of regimes. The freedom in that democracy has to be experienced to be believed — with shame and privilege in particular emerging over time as anathema. But it is inherently unstable. As the authority of elites fades, as Establishment values cede to popular ones, views and identities can become so magnificently diverse as to be mutually uncomprehending. And when all the barriers to equality, formal and informal, have been removed; when everyone is equal; when elites are despised and full license is established to do “whatever one wants,” you arrive at what might be called late-stage democracy. There is no kowtowing to authority here, let alone to political experience or expertise.

The very rich come under attack, as inequality becomes increasingly intolerable. Patriarchy is also dismantled: “We almost forgot to mention the extent of the law of equality and of freedom in the relations of women with men and men with women.” Family hierarchies are inverted: “A father habituates himself to be like his child and fear his sons, and a son habituates himself to be like his father and to have no shame before or fear of his parents.” In classrooms, “as the teacher ... is frightened of the pupils and fawns on them, so the students make light of their teachers.” Animals are regarded as equal to humans; the rich mingle freely with the poor in the streets and try to blend in. The foreigner is equal to the citizen.

And it is when a democracy has ripened as fully as this, Plato argues, that a would-be tyrant will often seize his moment.


Sullivan clearly thinks that our current president (who was then a candidate) is exactly the kind of tyrant that Plato would have predicted. Sullivan was predicting him in May 2016, which is pretty impressive, in terms of political analysis:

For Trump is not just a wacky politician of the far right, or a riveting television spectacle, or a Twitter phenom and bizarre working-class hero. He is not just another candidate to be parsed and analyzed by TV pundits in the same breath as all the others. In terms of our liberal democracy and constitutional order, Trump is an extinction-level event. It’s long past time we started treating him as such.

The article is lengthy. It is worth reading.

Then, I'd suggest, it might be good to go back to that much shorter political pronouncement, back to Abraham Lincoln, and to remember that it will be up to us, and no one else, to insure that "government of the people, by the people, and for the people shall not perish from the earth."