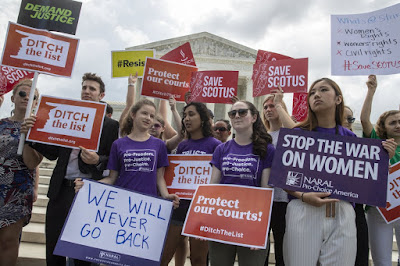 Roe v. Wade, which held that it was unconstitutional for the federal government or state governments to make abortion illegal, directly relied on Griswold as a precedent. Griswold itself, however, was not about abortion. It was about birth control.

In Griswold, the Court held unconstitutional a Connecticut law that made it a crime to provide married persons with birth control information or devices. In coming to that conclusion, the Court said that the Bill of Rights includes a "right to privacy." What a married couple does in the privacy of their bedroom is none of the government's business. Other decisions, including Roe v. Wade, have upheld a broad variety of personal freedoms, all based on Griswold and the "right to privacy" that Griswold identified.

Most Americans, I bet, are pretty happy that the Court discovered that the Bill of Rights includes a "right to privacy." We count on it! Since I teach a Legal Studies course on "Privacy, Technology, And Freedom" at the University of California, Santa Cruz, I talk about Griswold quite a bit.

The Bill of Rights, as most remember, is found in the first ten amendments to the Constitution. The First Amendment provides a right to free speech. The Second Amendment provides a right to bear arms. And the list goes on. Justice Douglas searched for some provision in the Bill of Rights that would provide a "right to privacy." He couldn't find one. In fact, there is no such enumerated "right to privacy" ever mentioned in the Constitution. So, what to do? Is it really alright for the government to regulate just how two persons decide to have sex?

Douglas and the Justices who joined him felt that there were "penumbras" cast by the other provisions in the Bill of Rights, and they looked into the shadows cast by those other provisions in their search for that "right to privacy." Let's quote Douglas directly. In his decision in Griswold, Douglas said that "the specific guarantees in the Bill of Rights have penumbras, formed by emanations from those guarantees." That is where that "right of privacy" can be found, in those "penumbras" and "emanations."

Maybe you can see why I call Griswold "the woooo-woooo case." It is easy to make fun of Griswold, in exactly the way that Henninger does, but as I tell my students, the decision in Griswold is profoundly correct, and is fully supported by the provisions found in the Bill of Rights.

The "woooo-woooo" language in Douglas' opinion aside, the Supreme Court is correct that a "right to privacy" can be derived directly from an examination of the various protections found in the long list of rights enumerated in the Bill of Rights. Read the Griswold decision to see the Court's logic.

There is also another basis for the Griswold decision; namely, the Ninth Amendment. That amendment, the text of which is quoted below, was included in the Bill of Rights to make surre that the rights listed in the Bill of Rights would not be construed as "limiting," so that the argument could never be made that if a right were not specifically mentioned that such a right would not be a right at all:

Ninth Amendment
The enumeration in the Constitution, of certain rights, shall not be construed to deny or disparage others retained by the people.

The Ninth Amendment might be thought of as a "fail-safe" provision, but I think it is more than that. I think the whole purpose of the Ninth Amendment was to make clear the "plenary" nature of the rights that the Constitution recognizes and protects. In order really to understand the Ninth Amendment, I believe, we need to revisit the Declaration of Independence:

We hold these truths to be self-evident, that all men are created equal, that they are endowed by their Creator with certain unalienable Rights, that among these are Life, Liberty and the pursuit of Happiness.--That to secure these rights, Governments are instituted among Men, deriving their just powers from the consent of the governed ...

Those who established our nation fought a War of Independence not only to separate from the abuses of the British King and Parliament. The language above indicates their purpose. Their purpose was to form a government that would derive all of its powers from the people, "the governed," and that would make clear that all persons have rights that are "unalienable."

"Liberty" and the right to "pursue happiness" are among those unalienable rights specifically identified in the Declaration of Independence,  and these are exactly the rights that the Ninth Amendment is designed to protect.

Griswold v. Connecticut, establishing an unalienable "right to privacy," is where our contemporary efforts to realize the "American Dream" have found a foundation that must not be weakened or undermined!