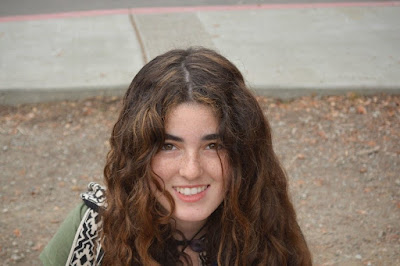 That is Rose Strauss in the picture above. She is an eighteen-year-old climate activist who is an environmental science major at the University of California, Santa Barbara.

On July 18, 2018, Strauss confronted Scott Wagner, a Republican candidate for Governor in Pennsylvania. Here is a link to a YouTube recording of the encounter. The actual video is available below.

The video of Strauss confronting Wagner (very politely, let me say) quickly "went viral," nationally. If you watch, you will see Wagner calling Strauss "young and naive" for asking whether the $200,000 in campaign contributions that Wagner has received from fossil fuel companies has influenced his views on climate change. Wagner has said that he actually does believe that the Earth is warming, but that "body heat" is a major reason. Wagner lets the oil companies off the hook!

In the July 26, 2018, edition of The New York Times, Dan Levin interviewed Strauss. Levin is a foreign correspondent for The Times who reports on climate change issues. Levin was particularly interested in how Strauss might use her recently-acquired fame to advance the issue she cares about so deeply.

Strauss' answer was that she (and lots of other motivated young people) would go "door to door" this summer, opening a dialogue.

I was particularly happy about Strauss' answer to Levin's question, since "door to door" is where real people who care about a political issue will meet real people who may well never have thought about it. Viral video is great, but "real people" are the people who can make "real change."

Going door to door is also a good way to discover the truth of what I said in my blog posting yesterday: "good people do exist."