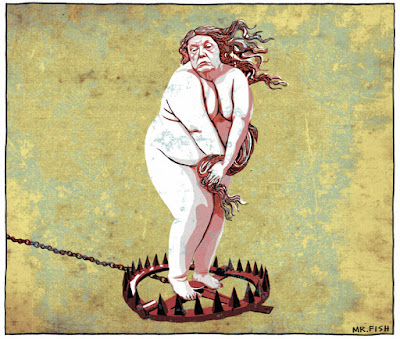 Chris Hedges is "a Pulitzer Prize-winning journalist, a New York Times best selling author, a former professor at Princeton University, and an ordained Presbyterian minister. He has written 11 books." That description comes from Hedges' Truthdig column, which I read on a regular basis. You can subscribe for free, and I recommend you do so.

The illustration at the head of this blog posting comes from Hedges' May 20, 2018, column, entitled, "The Coming Collapse." While our president is pictured, the focus of the column is the Democratic Party, not Donald Trump. Hedges argues that the Democratic Party has failed the country:

The leadership of the party, the Clintons, Nancy Pelosi, Chuck Schumer, Tom Perez, are creations of corporate America. In an open and democratic political process, one not dominated by party elites and corporate money, these people would not hold political power. They know this. They would rather implode the entire system than give up their positions of privilege. And that, I fear, is what will happen. The idea that the Democratic Party is in any way a bulwark against despotism defies the last three decades of its political activity. It is the guarantor of despotism.


Hedges also warns us that what lies ahead is a major financial collapse that may transform what Hedges calls "inverted totalitarianism" into the real thing.

The "antidote?" Hedges' prescription is one I endorse, too:

We must invest our energy in building parallel, popular institutions to protect ourselves and to pit power against power. These parallel institutions, including unions, community development organizations, local currencies, alternative political parties and food cooperatives, will have to be constructed town by town.

The idea that genuine "self-government," based on local efforts, is the only kind of government that can withstand and defy tyranny and totalitarianism, is exactly what political philosopher Hannah Arendt always argued. Arendt wrote a book called The Origins of Totalitarianism, and another book called On Revolution.

In my opinion, it's going to be one thing or the other.