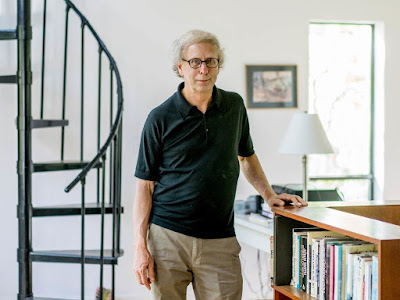 Pictured is N.R. Kleinfield. He is just ending a forty-year career as a reporter for The New York Times.  Kleinfield's last story, on the Brooklyn Housing Court, was published on the front page of The Times on May 27, 2018.

Also in that paper was a nice "goodbye" column by Kleinfield, which discussed the fact that his entire career was almost entirely spent as a feature writer, "chronicling the unnoticed."

"Most of the people I wrote about," said Kleinfield, "weren't famous or powerful. They were anybody and everybody. They were people working through the rust to answer their imagination, their experiences incidental to the amplified news of the day."

So many of my subjects get labeled ordinary people. I find that diminishing. To me, they are extraordinary. An authentic richness fills their souls, and they have a keen sensory awareness of the way the world works ... To these people I came to admire, their lives felt like whispers. To me, they were glorious songs.

Be inspired, as I was, by what Kleinfield had to say about his subjects. They were "extraordinary," not "ordinary."