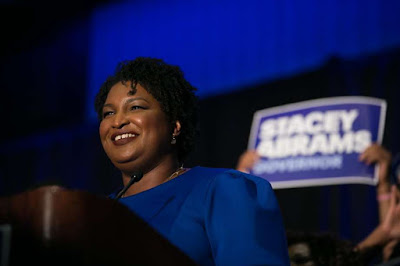 Pictured is Georgia gubernatorial candidate Stacey Abrams. Abrams is a Democrat, and she just won a primary contest against another "Stacey," also a Democrat. The Nation calls Abrams' victory "revolutionary."

Joe Garofoli writes a column for the San Francisco Chronicle that he titles, "It's All Political." Garofoli's column on Thursday, May 24th revealed that there was a "major Bay Area connection" behind Abrams' success:

Long before liberal pundits and MSNBC jumped on Abrams’ bandwagon, she was getting strategic help and money from a small crew of Bay Area political operatives and wealthy donors. She’s about to get $10 million more for the general election from that group, headed by San Franciscans Steve Phillips and his wife, Susan Sandler.

To them, Abrams represents what the Democratic Party should be doing to win back red states like Georgia as a way to take control of Congress and the presidency.

The plan: Forget chasing working-class white voters who backed Donald Trump in 2016. Instead, appeal to a coalition that includes people of color, young voters and progressive whites.

Let me agree with Abrams on that strategy. Explaining to voters how bad Donald Trump is doesn't win elections. Hillary Clinton tried it at the presidential level, and it clearly didn't work. It won't work for state or congressional campaigns, either.

It is not who you're against that will be persuasive; it's what you're for!