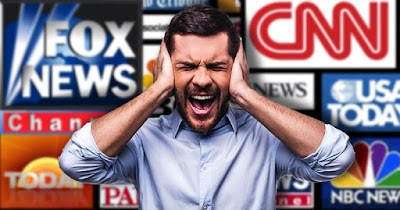 We live in an era of "fake news," whether generated and distributed by Russian bots, or by political campaigns employing big data managers like Cambridge Analytica, or by the "mainstream media," or by the "infosphere" in general.

The deliberate injection of falsehoods into politics may not, actually, be all that new, but it is both distressing and debilitating, and its impact has certainly been greatly magnified by the insinuation of intentional untruth into virtually every cranny of the digital world in which we spend more and more of our time.

Rebecca Newberger Goldstein has written an interesting analysis of the phenomenon, titled "Our Moment of Truth" in the hard copy version of the March 17-18, 2018, edition of The Wall Street Journal. Goldstein takes us back to ancient Greece, to document that the deliberate injection of falsehood into political discourse has a long lineage.  She also makes another observation that I think is worth pondering:

One of the things that we sometimes do with words is to pledge our allegiance—which has everything to do with the phenomena of post-truth. In today’s political discourse, we have taken to repurposing certain propositions so that pronouncing them is not so much an assertion of truth as a pledge of allegiance to our political tribe. In these acts of pseudo-assertion, the information being conveyed isn’t about the topic of the proposition at all; it’s about the political loyalties of the speaker.

Consider two different propositions, from opposite ends of American politics: (1) “The only way to stop violent crime is to allow citizens to arm themselves,” and (2) “For a person of privilege to make creative use of the culture of the underprivileged is an act of aggression and abuse.” The information that we can glean from these statements isn’t about the putative topics—gun control or cultural “appropriation,” respectively. It’s about the political identity of the speaker.

Such assertions are tribal banners, and offering counter-evidence isn’t likely to get you very far. Indeed, a pledge of political allegiance achieves greater authenticity if it flies in the face of counter-evidence, especially if that evidence comes from “so-called experts.” My insistence that “Human actions have no impact on global warming” gains immeasurably, as a pledge, from the fact that 97% of climate scientists disagree with me; it highlights the depth of my commitment to the cause. Similarly, to show my solidarity with others who wish to ban “Frankenstein” foods, I can insist that “Genetically engineered crops are unsafe for humans and animals,” even as I’m presented with an exhaustive study by the National Academies of Science concluding that there is no such evidence.


Goldstein concludes that it is the "promotion of political ends above all else" that is the cause of our problem - and a problem it truly is. Politics is essential to us. We do "live in a political world," and if that world is constructed not on the basis of truth, but of untruth, the foundations of our existence are undermined and placed in peril. A community built upon falsehoods is an edifice constructed upon those proverbial "sands," which will never support it.

The mechanism by which this transmutation of our politics has been occurring, in my opinion, is through a confusion about what "politics" is actually all about. Politics is not about the triumph of one side over another (truth over falsehood, or capital over labor). As Hannah Arendt repeatedly tells us, a genuine politics is about conflict, not consensus. A healthy politics celebrates the debate itself, and elevates the differences between us to the leading role. When only one idea is acceptable to us, we are on the road to totalitarianism, and the elastic health of democratic self-government is put at risk.

We had better not pledge allegiance to any single proposition, party, or program, but rather to the democratic process of debate itself. That is our best way of deciding what we, together, should be seeking to accomplish. Only when we approach our politics in this way will we realize that despite our differences (which are many and manifest) the essential "truth" of our existence is not that we are from separate tribes or parties, but that we are together in this life, and that it is this unity of our common existence, not our many differences, that is the ultimate "truth," which must animate our politics, and to which we owe a common allegiance. 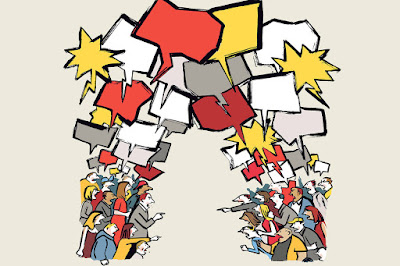